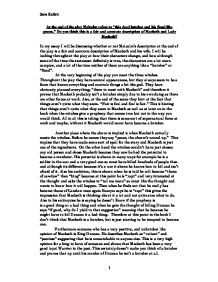 At the end of the play Malcolm refers to this dead butcher and his fiend like queen. Do you think this is a fair and accurate description of Macbeth and Lady Macbeth?

At the end of the play Malcolm refers to "this dead butcher and his fiend like queen." Do you think this is a fair and accurate description of Macbeth and Lady Macbeth? In my essay I will be discussing whether or not Malcolm's description at the end of the play is a fair and accurate description of Macbeth and his wife. I will be looking throughout the play at how their characters change, and how although some of the time the statement definitely is true, the characters are a lot more complex, and a lot of the time neither of them are anything like a "butcher" or "fiend". At the very beginning of the play you meet the three witches. Throughout the play they have several appearances, but they always seem to be a force that knows everything and controls things a bit like god. They have obviously planned everything, "there to meet with Macbeth" and therefore it proves that Macbeth probably isn't a butcher simply due to his own doing as there are other forces at work. Also, at the end of the scene they hint at the fact that things aren't quite what they seem. "Fair is foul and foul is fair." This is hinting that things aren't quite what they seem in Macbeth as well as at later on in the book when the witches give a prophecy that comes true but not in the way you would think. All in all this is telling that there is some sort of supernatural force at work and maybe, without it Macbeth would never have become a butcher. Another place where the above is implied is when Macbeth actually meets the witches. Before he comes they say "peace, the charm's wound up." This implies that they have made some sort of spell for the story and Macbeth is just one of the ingredients. ...read more.

Very few people would be able to argue with it, especially someone like Macbeth who hardly even tries. I think the reason for this is the fact that really he kind of wanted to do it all along and now he has her telling him he should, its easy just to go along with it. Just before and just after the death of Duncan Macbeth suffers from a lot guilt and regret. This is greatly shown in one of his soliloquies in which he is hallucinating. "A dagger of the mind, a false creation proceeding from the heat oppressed brain." This tells us that he is disturbed about what he is about to do, as his head is "heat oppressed" and because he is hallucinating it makes you think that he's a bit distressed. After he has murdered Duncan he goes back to this wife but in his hurry to get away he forgets to leave the daggers and starts hallucinating again, "Methought I heard a voice cry sleep no more." He thinks he's hearing voices. On top of this he is taking about how he is unable to say amen, "But wherefore could not I pronounce amen." The fact he can't say amen gives the idea that he thinks he's going to h**l, this is telling us that Macbeth is very disturbed by what he has just done and feels like what ever he dose he won't be able to get rid of his guilt. "This my hand will rather the multitudinous seas incarnadine." Even after Macbeth has ordered the murderers out to kill Banquo he still shows regret, "Full of scorpions is my mind." This tells us that he can't stop thinking about the terrible things he has done and as a result his mind is hurting like a scorpions bite. This pain is so great that he even says he would prefer to be dead just like Duncan if it meant he could be in peace and this shows the depth of his regret. ...read more.

To conclude Shakespeare creates two very complex characters; who because of the way they are portrayed, definitely do not seem like a fiend and butcher. I think that Macbeth is never really a proper butcher, as at all points during the play he suffers from; guilt, regret, a super natural force, or simply the fact that he feels he has to kill people because it's to late to stop. On the other hand, I can understand why Malcolm would think what he did as he only knew the story from a spectator's view, so therefore I believe that it was a fair thing for him to say, just not a particularly accurate one. The reason that we, as readers can learn so much about the characters is that Shakespeare really lets us into the minds of the characters; one of the best examples of this is in Macbeth's soliloquies Without this we probably would; just like Malcolm, have thought Macbeth was a Butcher. As for Lady Macbeth, I feel that she is also never really a fiend. Just like Macbeth there is always something which makes her seem more human than that and it is all due to Shakespeare's great techniques. For Lady Macbeth, probably the most important is her last scene in which she sleepwalks, as it tells us so much about her real personality. As a result, just like Macbeth I think that Malcolm has the right to think of her as a fiend as she did do some terrible things, but because we know so much more about her we know that really she isn't a fiend at all. Furthermore there are the witches. Without them I think without none of the murders would ever have happened. I think that they also prove that Macbeth and his wife are not evil because a lot of their actions were out of their control. Although I don't think the witches controlled everything, I think they where the catalyst to a lot of it. The end at last. ?? ?? ?? ?? Sara Kellett 1 ...read more.