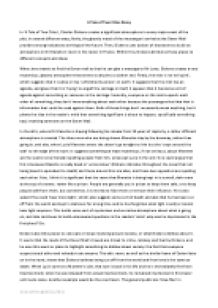 Atmosphere in the Opening of 'A Tale of Two Cities'

﻿A Tale of Two Cities Essay In ?A Tale of Two Cities?, Charles Dickens creates a significant atmosphere in every major event of the plot, in several different ways; firstly, the ghostly mood of the messenger?s arrival at the Dover Mail provides strong indications at things of the future. Then, Dickens uses actions of characters to build an atmosphere in Dr Manette?s room in the tower in France. Within this, Dickens attributes these places to different concepts and ideas. When Jerry travels to find the Dover mail so that he can give a message to Mr Lorry, Dickens creates a very mysterious, gloomy atmosphere that seems to allude to a darker end. Firstly, the mist is ?an evil spirit?, which suggests that it is alive or has ?unfinished business? on earth. ...read more.

It suggests something at least mysterious, if not ominous, about Manette and he seems to be literally repelling people from him, all except Lucie in the end. One could argue that this is because Manette is really dead or ?unconscious? (Dickens indicates throughout the novel that not being loved is equivalent to death) and those around him are alive, and these two opposites are repelling each other. Also, I think it is significant that the room that Manette is being kept in is a small, dark room at the top of a tower, rather like a prison. People are generally put in prison to keep them safe, or to keep people safe from them, but sometimes, it is merely to hide them or remove their influence. He is also asked if he could ?bear more light?, which also suggests some sort of death and also that he has been cut off from ...read more.

When Lucie comes to Manette?s side, that love is back in his life and he is immediately free from imprisonment; when he was released from actual imprisonment, he remained imprisoned in this tower until Lucie came. Another example would be the courtroom. The general public are ?blue-flies? in Dickens?s eyes, buzzing and searching for victim after victim. The courtroom is a place that is linked to death, and shows Dickens?s hatred of the harshness of the law. This place is also connected by Dickens to the public wanting the harshness of the law and being responsible for each execution, rather than the jury or the judge. Ultimately, a Tale of Two Cities tells the story of a few people, specifically in this context Dr Manette, and their transformation through the love and sacrifice of others; here, that would be Lucie Manette. Dr Manette was merely a mad prisoner before Lucie found him, and then, he was ?recalled to life?. Joshua Efiong06/11/2011 ...read more.