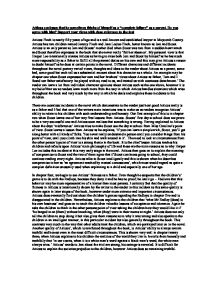 Atticus confesses that he sometimes thinks of himself as a &quot;complete failure&quot; as a parent. Do you agree with him? Support your views with close reference to the text.

Atticus confesses that he sometimes thinks of himself as a "complete failure" as a parent. Do you agree with him? Support your views with close reference to the text Atticus Finch is nearly fifty years of age and is a well-known and established lawyer in Maycomb County. Atticus has two children named Jeremy Finch and Jean Louise Finch, better known as Jem and Scout. Atticus is an only parent as Jem and Scouts' mother died when Scout was two from a sudden heart attack and Scout therefore expresses in the book that she never really 'felt her absence'. My personal view is that Harper Lee intentionally creates Atticus as having to raise both Jem and Scout by himself as he has much more responsibility as a father to fulfill all the parental duties on his own and this may give Atticus a reason to doubt himself as he does at certain points in the novel. Different characters and different incidents throughout the novel portray varied views, thoughts and ideas to the reader about Atticus as a parent, some bad, some good but each tell us a substantial amount about this character as a whole. An example may be chapter one when Scout expresses her own and her brothers' views about Atticus as father, 'Jem and I found our father satisfactory: he played with us, read to us, and treated us with courteous detachment.' The reader can learn a lot from individual character opinions about Atticus such as the one above, however it is my belief that we as readers learn much more from the way in which Atticus handles situations which arise throughout the book and very much by the way in which he deals and explains these incidents to his children. There are countless incidents in the novel which demonstrate to the reader just how good Atticus really is as a father and I feel that one of the writers main intentions was to make us as readers recognise Atticus' ability to relate to his children with such understanding and honesty. ...read more.

She explains to him that 'when Jem and [her] fuss Atticus doesn't ever just listen to Jem's side of it, he hear's [her] side too.' The way in which Atticus handles the children contrasts very much with the way in which Uncle Jack handles them in this incident and really emphasises and highlights to the reader Atticus' fairness as a father, which the writer also demonstrated earlier in the novel. There is also a certain sense of humor and irony that comes from the way Scout seems to be telling her Uncle off. Scout asks her Uncle what a whore-lady is and being put in this uncomfortable position, Jack completely avoids the question by 'plunging into a long tale about an old Prime Minister.' Again, we as readers are able to compare the way in which Uncle Jack handles this sort of situation to the way in which Atticus does and I think that this is one of the writer's main intentions. Atticus is given a chance to express both to the reader and to Uncle Jack about the way he feels adults should handle situations such as this and the reader realises the major differences between Atticus and the majority of other parents who would have probably acted as Uncle Jack had done. Atticus seems to understand and relate to children much better as he explains to Uncle Jack that 'children are children but they can spot an evasion quicker than adults, and an evasion quickly muddles'em' We really begin to like and admire Atticus when we find out that Atticus has never 'laid a hand on [Scout]' and Atticus also explains that Scout tries her best and that is all that matters. In chapter ten, we find out about Atticus' dislike and uninterest in guns and rifles and he reminds Jem 'that it is a sin to kill a mockingbird', an important lesson which Atticus knows will be needed later. ...read more.

The second instance is also in chapter twenty three when we learn from Scout that 'Atticus assured [them] that nothing would happen to Tom Robin son until the higher court reviewed his case, and that Tom had a good chance of going free.' Again, the readers are lulled into a false sense of security, putting full faith in Atticus and his judgement. We do find out however, in chapter 24 that in fact Tom himself had no faith in Atticus and did not believe that he would be released and this may be what caused him to try and runaway which subsequently lead to his death. The last instance in which Atticus proves again to be very wrong in his beliefs is during chapter fifteenwhen he explains to Jem and Scout that 'we don't have mobs and that nonsense in Maycomb.' We soon find out later in the very same chapter that in reality, Maycomb does have mobs and Atticus' idealism backfires at him during this particular scene. It seems, knowing the above, that the author has included imperfections in the character of Atticus, idealism and having too much faith in mankind, some examples. My personal belief is that by including such examples of imperfections in Atticus' character, makes him seem much more human like and more believable for the reader, rather than a faultless hero which we know is humanly impossible. I would like to briefly conclude this essay by saying that overall, I strongly do not agree with Atticus' view that he is a 'complete failure' as a father. My reasons for believing so are as stated earlier in this essay however I also believe that by simply making a few honest and unintentional mistakes, most of which I have stated above, does not make him any less of a good father. On the contrary, I strongly believe that the author intentionally illustrates imperfections in his character to make the readers recognise both Atticus' strengths and weaknesses and realise that ultimately, nobody is perfect. By Amrita K. Bhohi 10 Shack Miss Grundy ...read more.