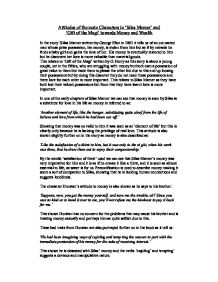 Attitudes of the main characters in 'Silas Marner' and 'Gift of the Magi' towards money and wealth.

Attitudes of the main Characters in 'Silas Marner' and 'Gift of the Magi' towards Money and Wealth In the story 'Silas Marner written by George Eliot in 1861 it tells us of an out casted man whose prize possession, his money, is stolen from him but as if by miracle he finds a baby girl and gains the love of her. His money is eventually restored to him but he discovers her love is more valuable than material goods. This relates to 'Gift of the Magi' written by O.Henry as this story is about a young couple, set in the fifties, who are struggling with money but both own a possession of great value to them but trade them to please the other but due to this end up loosing their possessions but by doing this discover they do not need these possessions and there love for each other is more important. This relates to Silas Marner as they have both lost their valued possessions but from this they have learnt love is more important. In one of the early chapters of Silas Marner we can see that money is seen by Silas as a substitute for love in his life as money is referred to as: 'Another element of life, like the hunger, substituting quite aloof from the life of believe and love from which he had been cut-off.' ...read more.

This accumulation of verbs reflects panic and shows Silas Marner is terrified of loosing his money, suggesting it is of great value to him. We are told that Silas screams when he discovers his money has clearly been taken. This signifies his horror at this loss. Silas is shown as greatly disturbed by the theft as the book tells us: Later in the book Silas early affection towards Eppie is shown as the book as it tells us: 'He could only have said that the child was come instead of the gold - that the gold had turned into the child' This shows Silas' strong feelings for the gold had now been directed towards Eppie. This also gives connotations of the story of King Midas but instead of animated objects becoming inaminate Eppie for Silas' is like the gold materialised into a person. Eppie is also compared to the gold further on in the book as it says: 'Unlike the gold which needs nothing, and must be worshipped in close-locked solitude - which was hidden away from the daylight, was deaf to the songs of birds, and stated to no human tones - Eppie was a creature of endless claims and ever-growing desires, seeking and loving sunshine, and living sounds, and living movements.' ...read more.

being able to catch the envy of even the wealthiest of people as it says: 'Had the queen of Sheba lived in the flat across the airshaft, Della would have let her hair hang out the window someday to dry just to depreciate Her Majesty's jewels and gifts. Had King Solomon been the janitor, with all his treasures piled up in the basement, Jim would have pulled out his watch every time he passed, just to see him pluck at his beard with envy.' This emphasises the value of their possessions, as the queen of Sheba and King Solomon are known for their wealth. Also in the story of Queen Sheba and Solomon Queen Sheba is told to have been 'breathless' before Solomon's wisdom. This may suggest that Della's attitude to Jim is similar and she is completely enthralled by Jim. Also the description of the room slightly further on in the story tells of a 'worn red carpet' in Della and Jim's home. This gives connotations of wealth, as red carpets are often associated with celebrities. It is told to be worn making it seem undesirable this ....? Baby I love u, u r my life, my happiest moments were in complete if u weren't by my side. U r my relation and connection to the sun, when u r next to me theres no doubt or sadness I cant over come. ...read more.