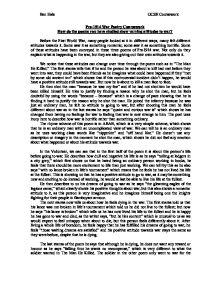 Pre-1914 War Poetry Coursework How do the poems you have studied show varying attitudes to war? Before the First World War, many people looked at it in different ways, many felt different attitudes towards it. Some saw it as something romantic; some saw it as something horrific. Some of these attitudes have been conveyed in these three poems of Pre-1914 war. Not only do they explain what is happening in the war, but they are also giving out their own attitudes towards it. We notice that these attitudes can change over time through the poem such as in "The Man He Killed." The first stanza tells that if he and the person he was about to kill had met before they went into war, they could have been friends as he imagines what could have happened if they "met by some old ancient inn" which shows that if this controversial incident didn't happen, he would have a positive attitude still towards war. But now he is about to kill a man face to face. He then shot the man "because he was my foe" and if he had not shot him he would have been killed himself. He tries to justify by finding a reason why he shot the man, but he feels doubtful by using the words "because - because" which is a change of pace showing that he is finding it hard to justify the reason why he shot the man. ...read more.

The next stanza now tells us about how he feels dying in the war. The first stanza told us that his lance was not broken in life's tournament which told us he did not live to the fullest; but now he says "his lance is broken" which tells us he has now lived his life to the fullest and he is happy he has gone to war and died, as the writer says, "but he lies content" which is unusual to us as we would expect to feel unhappy when about to die, but this person feels differently about it. After living a whole life of boredom, he feels happy that he has fulfilled his dreams of going to war, he feels "those waiting dreams are satisfied" and his positive attitude towards war stays the same as they were before, despite that he is dying. The last stanza of the poem he says that although he is dying, he does not want any reward or honour as he says "falling thus he wants no recompense," which is very different to what the soldier wanted in The Man He Killed. The soldier in the other poem only went to war for the money, with no feeling towards war whatsoever; whereas in The Volunteer he only went to war to fulfil his dreams and excitement in his life, he didn't anything in return at all but to satisfy himself. ...read more.

Not only is this poem about how the drum symbolizes the horrors of war, but the poem itself goes in the rhythm of a drum when read aloud, as though there is a beat going through each syllable of the poem, for example "I hate that drum's discordant sound," showing how relevant the drum is to this poet and his experience of war. Out of the three war poems that I have looked, each of them is a very different attitude towards war. The most positive attitude towards it was the soldier in The Volunteer, as it was his longing dream to fight in the war, and he felt happy that he was dying as an ordinary soldier in the battle. The poem that conveyed the most negative attitude towards was in The Drum, as he showed how the drum reminded him of the horrific events that he saw in the war of soldiers dying and towns burning. In the Man He Killed however, he didn't show much positive or negative attitude towards war. He felt no emotion for it when he went to war, but after killing a man right in front of him, he became very personal about it, and was horrified at the fact he ended someone's life. ?? ?? ?? ?? Ben Hale GCSE Coursework ...read more.