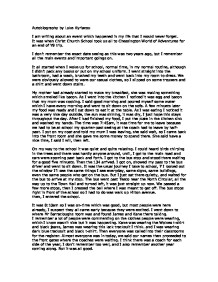 Autobiography by Luke Kyriacou I am writing about an event which happened in my life that I would never forget. It was when Christ Church School took us all to Chessington World of Adventures for an end of Y9 trip. I don't remember the exact date seeing as this was two years ago, but I remember all the main events and important goings on. It all started when I woke up for school, normal time, in my normal routine, although I didn't pack any books or put on my school uniform. I went straight into the bathroom, had a wash, brushed my teeth and went back into my room to dress. We were obviously allowed to ware our casual clothes, so I slipped on some trousers and a shirt and went down stairs. My mother had already started to make my breakfast, she was making something which smelled like bacon. As I went into the kitchen I noticed it was egg and bacon that my mum was cooking. I said good morning and poured myself some water which I have every morning and went to sit down on the sofa. A few minuets later my food was ready and I sat down to eat it at the table. As I was eating I noticed it was a very nice day outside, the sun was shining, it was dry, I just hope this stays throughout the day. ...read more.

All there was, was a hill with the log flume, and the line for that was horrendous so we walked back down and watched the Samurai. We noticed there was two lines, one if you want to go on in a group, and one if you don't mind who you go on with. The line where you didn't mind was very small and concluded that if we lined up here we would get on quicker than Jonny and co. We began to line up, and after a few rides has past, it was my go. The Samurai was meant to be the worst ride in Chessington, it was a ball with pillars coming out of it, high up which all spin around. The sit all in a line on the pillars which spin and the ball which spins; very scary, it goes upside down, I had never been on a ride which goes upside down before but this gave me a rush of excitement and urged me to go on more. I stepped up onto the raised platform and got in. The safety support came down onto us and secured us in place. then the ride raised up off the floor and began to spin slowly, it was fun. The spinning started to get faster and I began to feel good. I was enjoying it. The ride was spinning round and round and then started to go upside down in all direction. ...read more.

There wasn't many people there yet, and seeing as this is Christ Church, I figured we would be a bit late leaving. Imagine trying to gather up the whole of the year group lost on a theme park; Yes, h**l. Finally everyone did arrive back and we began to board the coach. Although back in McDonalds I remembered Mr Brian arguing with two guys who looked about eighteen, they were sitting in there car in the car park looking not too friendly. But we just got on our coach. Then, I don't know how it happened, but the other coaches window was smashed at the back, and the two guys in the car were gone. The people in the coach were made to get off in case it shatters and someone called for repairs. They were allowed to go back into the park for another hour or so while we head home. Not fair. I remember on the way back on the motor way, people were swearing and making rude gestures to lorry drivers. Some laughed, most ignored and some swore back. I remember we passed the same man about three times and he looked like he got angry. But that was about it. It was a boring travel home and I couldn't wait to get back. We arrived at the school at about 6pm and I went straight to the bus stop. Waited for the 134 again with Aristos for about 10 minuets. We briefly summarised the day, then he bus came. I got on and went and sat down. ?? ?? ?? ?? ...read more.