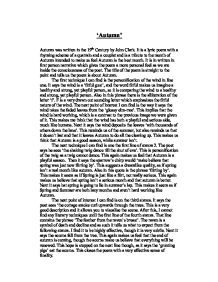 'Autumn' Autumn was written in the 19th Century by John Clark. It is a lyric poem with a rhyming scheme of a quatrain and a couplet and is a tribute to the month of Autumn intended to make us feel Autumn is the best month. It is in written in first person narrative which gives the poem a more personal feel as we are inside the consciousness of the poet. The title of the poem is straight to the point and tells us the poem is about Autumn. The first technique I can find is the personification of the wind in line one. It says the wind is a 'fitful gust', and the word fitful makes us imagine a healthy and strong, yet playful person, so it is comparing the wind to a healthy and strong, yet playful person. ...read more.

This makes us think that Autumn is a good season, while summer isn't. The next technique I can find is one the first line of stanza 2. The poet says he sees 'the shaking twig dance till the shut of eve'. This is personification of the twig as a twig cannot dance. This again makes us feel that Autumn is a playful season. Then it says the sparrow's chirp would 'make believe that spring was just now flirting by'. This suggests a dreamlike quality, as if spring isn't a real month like autumn. Also in this quote is the phrase 'flirting by'. This makes it seem as if Spring is just like a flirt, not really serious. ...read more.

Next it says the acorns fall from the tree. This again makes us feel that the end of autumn is coming, though the acorns make us believe that everything will be renewed. This hope is stopped on the next line though, as it says the 'grunting pigs' eat the acorns. This closes the poem with a very effective sense of finality. This poem is quite effective in conveying that autumn is a good month as it uses a good variety of literary techniques in most of the poems to get the point across. The lack of techniques in the third stanza does let it down somewhat though. Also, I found the ending to be very effective as it was a great contrast with the rest of the poem which contained so much life. ...read more.