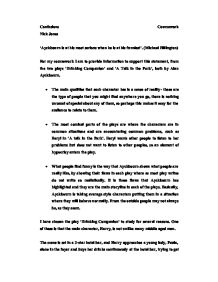 'Ayckbourn is at his most serious when he is at his funniest'. For my coursework I am to provide information to support this statement, from the two plays 'Drinking Companion' and 'A Talk in the Park', both by Alan Ayckbourn.

Confusions Coursework Nick Jones 'Ayckbourn is at his most serious when he is at his funniest'. (Michael Billington) For my coursework I am to provide information to support this statement, from the two plays 'Drinking Companion' and 'A Talk in the Park', both by Alan Ayckbourn. * The main qualities that each character has is a sense of reality- these are the type of people that you might find anywhere you go, there is nothing unusual of special about any of them, so perhaps this makes it easy for the audience to relate to them. * The most comical parts of the plays are where the characters are in common situations and are encountering common problems, such as Beryl in 'A talk in the Park'. Beryl wants other people to listen to her problems but does not want to listen to other peoples, so an element of hypocrisy enters the play. * What people find funny is the way that Ayckbourn shows what people are really like, by showing their flaws in each play where as most play writes do not write so realistically. ...read more.

He is a middle aged man that is desperately trying to have s*x with a young woman, so we feel both think that he is sad, yet have a reserved sense of pity, and through all this seriousness still find the character funny. From the beginning of the scene it is obvious that Harry is fighting a losing battle, and the comedy comes from the fact that everyone can see this except Harry himself. As usual in ayckbourns plays, a normal situation is performed to an audience, and highlights the areas in society that, in ayckbourns opinion, are a cause for concern, and uses laughter as a medium to show these areas. In every play, although at first one laughs, there is always a serious message behind each play. This is shown well in the next play I have chosen to study, "A Talk in the Park". This play is the last of the five 'Confusions' plays and at first involves four characters sat on the four benches. A bird-like man named Arthur sits on the first bench and tries to strike up a conversation with the young woman sat next to him. ...read more.

Hypocrisy, ignorance and certain aspects of cynicism are all included during this play, and are all common qualities in humans, however unpleasant they may be. These qualities are again shown through the medium of comedy, which is both the most enjoyable from the audience's point of view, and probably most effective for getting the message across. It helps the audience to understand more if they can laugh about the faults that both people in general have and possibly their own. The common theme that runs throughout all of the five plays in confusions, and indeed most of Ayckbourns plays, is that of laughter and seriousness at the same time. Because of this, the audience thinks about the circumstances and possibly what they would do had they been in the same situation, so it helps them to identify with each character, but laugh also. When viewing the plays, one must consider whether one is at fault to the extent of some of the characters that occur in the plays, and if so how to remedy that relationship. The plays are written deliberately to stir up many different emotions in each play, and it is through laughter that this is done so well ...read more.