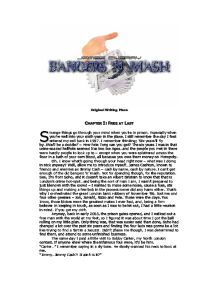 Original Writing Piece CHAPTER I: FREE AT LAST S trange things go through your mind when you're in prison. Especially when you're well into your sixth year in the place. I still remember the day I first entered my cell back in 1997. I remember thinking; 'Six years'll fly by...this'll be a doddle!' - How Pete Tong can you get? The six years I was in that urine-soaked hellhole seemed like two Ice Ages...and the people you met in there were hardly people to look up to - except when you were splattered across the floor in a bath of your own blood, all because you owe them money on Monopoly. Oh, I know what's going through your head right now - what was I doing in nick anyway? Well, allow me to introduce myself...James Cashton, known to friends and enemies as Jimmy Cash - cash by name, cash by nature. I can't get enough of the old bangers 'n' mash. Not for spending though, for the reputation. See, I'm from Soho, and it doesn't take an Albert Einstein to know that that is London's crime hot-spot...and being the sort of man I am, I wasn't prepared to just blend-in with the crowd - I wanted to make some noise, cause a fuss, stir things up and making a few bob in the process never did any harm either. That's why I orchestrated the great London bank robbery of November '96. Just me and four other geezers - Jon, Jamahl, Rizzo and Pete. Those were the days. You know, those blokes were the greatest mates I ever had, and, being a firm believer in keeping in touch, as soon as I was to be let out, I had a little reunion in mind. If you get my drift. Anyway, back in early 2003, the prison gates opened, and I walked out a free man with the world at my feet, so I figured it was about time I got the ball rolling on my little plan. ...read more.

The jam passed strangely quickly and I was on my way. Occasionally glancing at the rear view mirror again, I noticed the same black car driving right behind me, but thought nothing of it. The time was approaching half-nine, and I was drawing ever nearer to the circus, and apparently, so was the same black car that had been seemingly following me for the past 45 minutes. I pulled up the car about 100 metres from my destination and stepped out. So did the bald geezer behind me. I started my walk down the pavement ahead, occasionally peering over my shoulder to see the whereabouts of lard bucket copying my footsteps - he was always less than 4 metres away. As I continued walking, I passed a Transit van with its back doors open, and saw his reflection in the glass window. He was pulling something from his pocket - something small, discreet and rounded. I squinted my eyes at the image in the glass to see what it was...knuckle-dusters. Putting two and two together I realised that head case was after me, and slowly changed my gentle stroll into a speedier power walk - the slap head followed suit and began quickening the pace on his walk. I thought fast, and decided I needed to do something, and I did. I changed course and headed around the front of the van with speed. Badly looked round the back of the van, I wasn't there. I had changed direction again to come up behind him, pounding him one with a vicious right hook. He fell, but got up quickly and gave as good as he got. It wasn't to be long before I was outnumbered, however, as some more cronies came rushing out of a nearby building and ganged up on me like a pack of wild dogs. I was bloody and beaten...I didn't stand a chance of escaping, either. ...read more.

Sad story, really..." he began to cough up blood. I was filled with all sorts of emotions. I mean, could I even believe this...this was Charlie Henderson after all, not exactly the most reliable of folk. "How do you know all this?" I asked. "Because..." there was a long pause. "...I was the one that raped her." I was frozen in shock...was Charlie Henderson of all people my own father? "Y'see, your dad, well, her husband, he worked for me just like you did. Your mother didn't approve, tried to get the filth involved, so I gave her a little 'keep quiet message'...I didn't want her to get pregnant, nor did I want her dead, you have that sicko of a husband to blame for all that." He closed his eyes, took a deep breath, and continued. "In short, Jimmy, you're not a Cashton, you're a Henderson..." With a huge rush of adrenaline, I shot him. Nowhere in particular, I just shot him anywhere the bullets would go to. I dropped the gun, and froze on the spot, before storming out of the room and into Charlie's garage. I took a car, and drove off...and that was the last anybody saw of Jimmy Cash. So where am I now? Anywhere but London. Who am I now? Not Jimmy Cash, that's for sure. I could be anywhere...you could walk past me in the street, and would have no idea who I am. I could be sitting next to you on a park bench while you read the newspaper, and you would have no idea of what I have done in my life. If somebody said the name 'Jimmy Cash' to anybody in the world, they'd know exactly who that was, and what he had done...but if that somebody was me...you'd have no idea that you'd just be talking to the man himself. I suppose in twenty years time this'll all be an urban myth, but I'll still be around by then. London may have seen the last of me...but the world's a big place, who knows what will happen? I'm out there somewhere... ...read more.