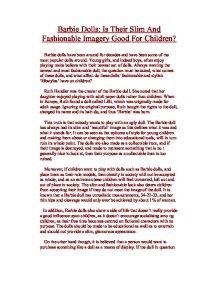 Barbie Dolls: Is Their Slim And Fashionable Imagery Good For Children?

Barbie Dolls: Is Their Slim And Fashionable Imagery Good For Children? Barbie dolls have been around for decades and have been some of the most popular dolls around. Young girls, and indeed boys, often enjoy playing make believe with their newest set of dolls. Always wanting the newest and most fashionable doll, the question must be asked, what comes of these dolls, and what affect do these dolls' fashionable and stylish 'lifestyles' have on children? Ruth Handler was the creator of the Barbie doll. She noted that her daughter enjoyed playing with adult paper dolls rather than children. When in Europe, Ruth found a doll called Lilli, which was originally made for adult usage. ...read more.

The slim and fashionable look also deters children from accepting their image if they do not meet the image of the doll. It is known that a Barbie doll has unrealistic measurements, 34-22-33, and her thin hips and cleavage would only ever be achieved by about 1% of woman. In addition, Barbie dolls also show a side of life that doesn't really provide a good influence upon children, as it doesn't encourage socialising among children, as their free time becomes centred on fictional characters with no purpose. The dolls should be made to be educational as well as to entertain and should not provide a slim, glamorous appearance. On the other hand though, it is believed that a person would want to purchase something like a doll as a means of display. ...read more.

the fact still remains that the Barbie doll does not at all contribute a child's social life. It does in fact have the opposite affect and makes a child believe that life should be centred on looking 'cool'. The Barbie doll should have its measurements changed for a start and should be made more education in order to be a children's toy. When it boils down to it though, collectors would want to have Barbie remain as she is, and would not want her any other way. This remains a divided issue, as the Barbie doll is not able to satisfy both needs at once, and cannot function as an educational tool and a piece of display as well. Anorexia groups and parents have also rallied many times to get a change to the appearance of Barbie dolls. We can expect this issue to continue for a long time. By Izaldin Ali 10B 10Y1 ...read more.