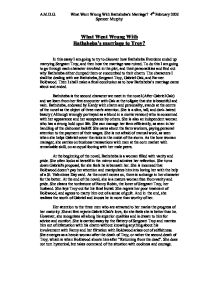 What Went Wrong With Bathsheba's marriage to Troy? In this essay I am going to try to discover how Bathsheba Everdene ended up marrying Sergeant Troy, and then how the marriage was ruined. To do this I am going to go through each character involved in the plot, and their personalities and find out why Bathsheba either dumped them or succumbed to their charm. The characters I shall be dealing with are Bathsheba, Sergeant Troy, Gabriel Oak, and Farmer Boldwood. Then I shall make a final conclusion as to how Bathsheba's marriage came about and ended. Bathsheba is the second character we meet in the novel (After Gabriel Oak) and we learn from her first encounter with Oak at the tollgate that she is beautiful and vain. Bathsheba, endowed by Hardy with charm and personality, stands at the centre of the novel as the object of three men's attention. She is a slim, tall, and dark-haired beauty (Although wrongly portrayed as a blond in a movie version) who is concerned with her appearance and her acceptance by others. She is also an independent woman who has a strong hold upon life. ...read more.

He genuinely cares for them and their feelings, and is willing to work beside them, always providing service. Gabriel is also a smart person. He has a great knowledge of farming and nature and uses the knowledge wisely to the benefit of everyone, especially Bathsheba. Early in the novel, he saves the farm from ruin by fire. He later saves a year's worth of crops from the rain. Gabriel is also widely read and has literary taste. His collection of books includes Paradise Lost, The Pilgrim's Progress, and Robinson Crusoe. He also plays the flute in a pleasing manner. Truly, Gabriel Oak is a gentle, kind, amiable, wise, and honorable character. He is also patient. At peace with himself and nature, he does not rush. He serves Bathsheba throughout the novel, with no hope of ever winning her. The reader is delighted that the story ends in a comedy for this well-liked protagonist. In the end, he wins Bathsheba not through guilt or manipulation, but she falls in love with him because he is a good person. Sergeant Troy is a tall person with an athletic appearance and handsome features. ...read more.

She resents his selfish ways, his gambling, and his refusal to work on the farm. When Bathsheba learns about his affair with Fanny, it is too late. The girl and her child are already dead, and Troy deserts her. When Bathsheba is ready to accept her mistake in encouraging Boldwood and marry him out of pity and duty, Troy dramatically reappears on the scene. Appropriately, the deranged Boldwood, who is still obsessed with Bathsheba, shoots him. The death of Troy and the incarceration of Boldwood allow Bathsheba and Gabriel to finally acknowledge their love for one another. At the end of the book, they marry quietly, and the villagers rejoice. So in conclusion I can say that Bathsheba ended up marrying Troy because, firstly she viewed Oak as "not worthy of her", secondly because she never loved Boldwood and only seeked his attention, and thirdly because she was wooed by Troys charm and the show he puts on for her. She then realises what Troy really is and resents him. Troy is then believed to be dead but upon his return Boldwood makes the myth of his death a fact by shooting him. Then the widowed Bathsheba opts to marry Oak for she finally realises his qualities. A.M.D.G. What Went Wrong With Bathsheba's Marriage? 4th February 2003 Spencer Murphy ...read more.