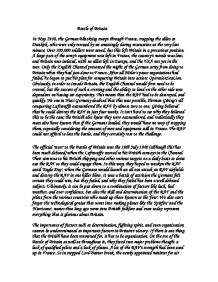 Battle of Britain In May 1940, the German Blitzkrieg swept through France, trapping the allies at Dunkirk, who were only rescued by an amazingly daring evacuation at the very last minute. Over 300,000 soldiers were saved, but this left Britain in a precarious position. A large part of the army's equipment was left in France, the country's morale was low, and Britain was isolated, with no allies left in Europe, and the USA not yet in the war. Only the English Channel prevented the might of the German army from doing to Britain what they had just done to France. After all Hitler's peace negotiations had failed, he began to put his plan for conquering Britain into action: OperationSeaLion. Obviously, in order to invade Britain, the English Channel would first need to be crossed, but the success of such a crossing and the ability to land on the other side was dependent on having air superiority. This meant that the RAF had to be destroyed, and quickly. No one in n**i Germany doubted that this was possible, Herman G�ring's all conquering Luftwaffe outnumbered the RAF by almost two to one. G�ring believed that he could destroy the RAF in just four weeks. It isn't hard to see why they believed this to be the case; the British also knew they were outnumbered, and realistically they must also have known that if the Germans landed, they would have no way of stopping them, especially considering the amount of men and equipment still in France. ...read more.

Such inexperience would show in the air and would also reflect in the numbers of RAF losses. This makes the British achievement in the battle even more amazing and raises the question as to whether the battle was won because of the pilots or in spite of them. But what they did took amazing bravery and underlines the fighting spirit and determination of those involved, to still take to the air knowing they faced almost certain death, but knowing the alternative would be even worse. Despite the problems the pilots faced, it is amazing just what can be achieved when there really is nothing left to lose. It has to be remembered, though, that the British did not fight alone, survivors from European air forces such as the French, Dutch, Polish, and Czech all arrived in Britain to fight for the RAF. Likewise, other pilots came from Commonwealth countries including Canada, Australia, and New Zealand as well as a few from the United States. All played important roles, and despite the obvious language problems, provided vital experience that helped give the British the fighting chance they needed. Britain did have one advantage though, and that was radar. Although unreliable, it allowed the British to track the German raids and send the fighters to where they were needed. ...read more.

The war was far from over, but the Germans had certainly got a b****y nose and suffered their first defeat. In four months, while Britain had lost 915 aircraft, the Germans had lost 1733 (North, 1990:113). There was still a long way to go, but it proved to the world that the Germans were not invincible. The Germans subsequently turned their attentions to the East and the invasion of Russia where they would suffer even greater problems. An uneasy stand off between Britain and Germany ensued. In the end, Britain had a lot to be thankful for. The skill and determination of her pilots could not be underestimated, but luck played an even more important role. The weather, so often derided in England, caused more problems than the Luftwaffe could cope with. Yet, it was the unfortunate action of one German pilot that altered the whole pattern of the war, but saved the RAF. Hitler's ego got in the way and changed Germany's tactics just when they had the British were they wanted them. Ultimately, it could be argued that the Germans lost the Battle of Britain rather than the British winning it. However, while the Germans made tactical errors, it still took the bravery and ability of the RAF to exploit these mistakes and defeat the Germans for the first time in the war. By Kay Bradley 10k ...read more.