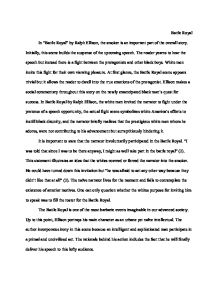 Battle Royal In "Battle Royal" by Ralph Ellison, the smoker is an important part of the overall story. Initially, this scene builds the suspense of the upcoming speech. The reader yearns to hear the speech but instead there is a fight between the protagonists and other black boys. White men incite this fight for their own viewing pleasure. At first glance, the Battle Royal scene appears trivial but it allows the reader to dwell into the true emotions of the protagonist. Ellison makes a social commentary throughout this story on the newly emancipated black man's quest for success. In Battle Royal by Ralph Ellison, the white men invited the narrator to fight under the pretense of a speech opportunity, the actual fight scene symbolizes white America's efforts to instill black disunity, and the narrator briefly realizes that the prestigious white men whom he adores, were not contributing to his advancement but surreptitiously hindering it. It is important to state that the narrator involuntarily participated in the Battle Royal. "I was told that since I was to be there anyway, I might as well take part in the battle royal" (2). This statement illustrates an idea that the whites coerced or forced the narrator into the smoker. He could have turned down this invitation but "he was afraid to act any other way because they didn't like that at all" (2). The na�ve narrator lives for the moment and fails to contemplate the existence of anterior motives. One can only question whether the whites purpose for inviting him to speak was to fill the roster for the Battle Royal. The Battle Royal is one of the most barbaric events imaginable in our advanced society. Up to this point, Ellison portrays his main character as an urbane yet na�ve intellectual. The author incorporates irony in this scene because an intelligent and sophisticated man participate in a primal and uncivilized act. ...read more.

The battle royal symbolizes a fight incited by whites to hinder black unity. Without unity, oppressed people cannot form an organized and powerful resistance to this oppression. The whites watching this battle royal, all want to keep the black man "in his place". This anti-progress group included distinguished members of society, even a preacher. For decades, this group roamed faceless and nameless. The idea that a minister could be a bigot seemed absurd; therefore, Ellison caused much commotion when he pinpointed the more subtle members of this group. Community members empowered to protect and serve blacks were included in this odious clique. The theme in this novel states that surreptitiously, whites acted as an encumbrance to racial equality is portrayed well in this passage. From a grammatical standpoint, the second sentence in the passage appears long and loaded with examples ad nauseam. After interpreting the concept, I realized that the lack of any example would lessen the overall magnitude of the sentence. The protagonist in this story views the educated white man as a friend and role model. When he sees all of his "friends" watching such a barbaric and inhumane act, he immediately becomes appalled. Ellison's uses excellent diction in the first sentence because each word displays the impact the event had on the protagonist. These men contrasted with the lead character because they allowed themselves to unleash their emotions and actions. They were exalted members of the community but they drank heavily. The protagonist refuses to relax his standards because he fears that this group might reject him. The narrator fails to decide his position on the white woman. Pummeled by feeling of love and adoration followed by hate, the narrator fails to decide which emotion to express. Ellison includes this scene because an intelligent black man on the path to success inevitably had to deal with the white woman. "Some threatened us if we looked and others if we did not" (4). ...read more.

Ellison used the beauty of the girl to contrast the inhumane and savage fighting. "Streaks of blue light filled the black world behind the blindfold" (6). This is the first time in the story that the narrator acknowledges his blackness. Ironically, he needed a blindfold to see that the other black fighters were his equals. With the blindfold on, he realized his invisibility and became amazed. Before the fight, the Battle Royal was the only obstacle stopping him from delivering his speech. He somehow felt that the other black boys were keeping him from achieving his goal. "I was seared through the deepest levels of my body to the fearful breath within me and the breath seared and heated to the point of explosion (11). The narrator finally comprehended that the white men were the true hindrance to his advancement. This revelation made him extremely angry and he even tried to topple the drunk out of his chair. He felt some compassion for the other blacks because they had to endure the electric carpet together. The only thing that calms him down is that he will soon deliver his speech. Oddly, the thought of his dream being close allows him to abandon any animosity towards the white men. The author included the Battle Royal scene to make black men aware of the true enemy. The narrator experiences much affliction to achieve his goal. He entered the Battle Royal with no love for his race but undoubtedly left with more respect for his fellow black man. The protagonist also briefly understood that the white man was not an ally in his quest to give his speech but he chose to veil this revelation. The narrator hides this revelation as he did with his grandfather's curse. He even came close to clashing physically with a drunken white man. Obviously the narrator who "was more afraid to act any other way because they didn't like that at all", has come a long way in this short period. Unfortunately, he readily dismisses this awareness and contemplates his all important speech. ...read more.