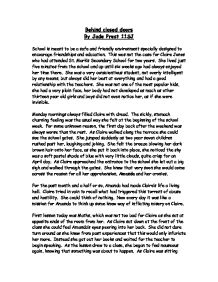 Behind closed doors By Jade Prest 11SJ School is meant to be a safe and friendly environment specially designed to encourage friendships and education. This was not the case for Claire Jones who had attended St. Mark's Secondary School for two years. She lived just five minutes from the school and up until six weeks ago had always enjoyed her time there. She was a very conscientious student, not overly intelligent by any means, but always did her best at everything and had a good relationship with the teachers. She was not one of the most popular kids, she had a very plain face, her body had not developed as much as other thirteen year old girls and boys did not even notice her, as if she were invisible. Monday mornings always filled Claire with dread. The sickly, stomach churning feeling was the usual way she felt at the beginning of the school week. For some unknown reason, the first day back after the weekend was always worse than the rest. As Claire walked along the terrace she could see the school gates. She jumped suddenly as two year seven children rushed past her, laughing and joking. She felt the breeze blowing her dark brown hair onto her face, as she put it back into place, she noticed the sky was a soft pastel shade of blue with very little clouds, quite crisp for an April day. ...read more.

She wracked her brain for ways she could avoid Amanda. Eventually, she accepted the fact she would just have to face her. As the bell rang, Claire gathered up her belongings, made an excuse to Lesley why she couldn't walk home with her and made her way to the exit. She walked as slowly as she possibly could so that most of the other children would have left, there was nothing more embarrassing than having and audience. As she pushed open the doors, she glanced around, noticing only a couple of sixth formers chatting near the gates. Where was Amanda? Seizing this opportunity, Claire made a dash for the gates, praying that Amanda had been given a detention or something even worse. Her look was in. No sign of her or her pals anywhere. Even though Claire's wrist and leg were throbbing, she walked home happier than she had for a while. She knew it would all repeat itself again tomorrow, but she would deal with that then. After a good nights sleep, Claire woke up and felt an ache in her leg. As she reached down, she noticed how swollen the area was. After a nice long shower, she felt ready to face the world. The walk to school today seemed to take longer than usual, as she hobbled along with her leg still hurting. ...read more.

The rest of the day went by very quickly, Claire couldn't keep her mind on anything and even Lesley noticed her head was somewhere else. She told her she was just tired. As Claire left the building she remembered she had left her homework in the last lesson so she went back in to get it. By the time she came back out all the children had gone. As she walking towards the gates she heard voices. She turned around and saw Mrs Dodds speaking to another lady. She wondered if it was about what she had said or just something to do with school. Her question was then answered, Amanda walked out of the office and joined the other two ladies. Her head hung down and Claire wondered whether or not she had done the right thing after all. Claire stood and watched as the lady put her arm around Amanda and guided her towards the car. As they came nearer, Amanda looked up at Claire, stared at her for a few moments, then smiled. It was not the same smile Claire had seen only yesterday when she was hurting her, this was a meaningful smile. Claire returned the gesture then she watched as Amanda got into the car with the lady. She assumed this lady was from Social Services or something. As they drove off, Claire could only pray that this would end in happiness for everyone. Somehow. ...read more.