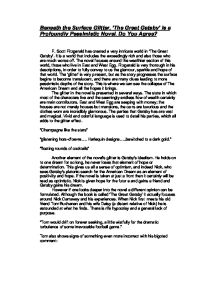 Beneath the Surface Glitter, The Great Gatsby is a Profoundly Pessimistic Novel. Do You Agree?

Beneath the Surface Glitter, 'The Great Gatsby' is a Profoundly Pessimistic Novel. Do You Agree? F. Scott Fitzgerald has created a very intricate world in 'The Great Gatsby'. It is a world that includes the exceedingly rich and also those who are much worse off. The novel focuses around the wealthier section of this world, those who live in East and West Egg. Fitzgerald is very thorough in his descriptions, in order to fully convey to us the glamour, sparkle and hope of that world. The 'glitter' is very present, but as the story progresses the surface begins to become translucent, and there are many clues leading to more pessimistic depths of the story. This is where we can see the collapse of The American Dream and all the hopes it brings. The glitter in the novel is presented in several ways. The state in which most of the characters live and the seemingly endless flow of wealth certainly are main contributors. East and West Egg are seeping with money; the houses are not merely houses but mansions, the cars are luxurious and the clothes worn are incredibly glamorous. The parties that Gatsby has are vast and magical. Vivid and colorful language is used to detail his parties, which all adds to the glitter effect. "Champagne like the stars" "glistening hors-d'oevre.... Harlequin designs.....bewitched to a dark gold." "floating rounds of cocktails" Another element of the novel's glitter is Gatsby's idealism. ...read more.

The party is also full of horrible people such as Mr and Mrs McKee. Nick is quite compelled by the way the people act, but is also greatly saddened, by the way in which they feel they must act. Gossip is spread round the part like a fire. Needless to say all the gossip is false and lies of some sort or another. The party ends with an act of severe violence that inevitably follows Tom around with his corrupt lifestyle, and Nick wakes up the next morning with a hangover in a cold station. Things do seem to become more optimistic when Nick learns of Gatsby and his dream. When he is told that Gatsby bought his house just so he could be close to Daisy. "He came alive to me, delivered suddenly from the womb of his purposeless splendour." The whole ideal that Gatsby has for Daisy, his hope, his optimism, his determination give Nick a sense of hope himself. He sees the purity of Gatsby's personal dream, and the similarity of it to The American Dream. He sees the wonder and intensity that the dream brings into Gatsby's life. Nick realises the true value of the dream to Gatsby. Chasing the dream and maintaining the ideal keeps Gatsby alive. It has also kept Gatsby pure and uncorrupted. Seeking an ideal has given his life purpose and meaning; he does not drift like the others do. However, to get to where he is on the social scale he has had to delve into an unlawful market. ...read more.

Myrtle and her friends seek to gain it, they all corrupt their aims with materialism and falsity on the way, and Myrtle, who perhaps gets the closest by having the affair with Tom, not only is corrupted, but also killed by the corruption. Gatsby seeks it, idealises Daisy too much and therefore is disappointed. He also has had to corrupt himself in his line of work in order for him to be able to be anywhere near close to achieving the dream. Arguably he does achieve this dream, but he has done it through corrupt methods. He is the closest to achieving the true American Dream, however he dies due to the corruption he brought upon himself by chasing it into reality. Gatsby failed to achieve his ideal. Even that of which he did, he was unable to keep, as Daisy's materialism drew her back to Tom. Tom and Daisy are indeed the only two to come out of the situation unscaved in anyway, and much like they started. The book shows us that the corrupt thrive and prosper, those who chase the American Dream inevitably end up failing. Everyone who does gain or already has the American Dream becomes a materialist. The pure that strive to reach the American Dream and succeed (Gatsby) end up dead. The gaining or maintaining or the dream also involves destroying many innocent lives along the way. The novel therefore shows us that the true American Dream is unreachable and incapable of being realised. It may already be a part of American history, and not a present day achievable dream. ...read more.

A solid essay that addresses the key ideas posed by the question. The biggest change needed is the inclusion of quotes and how they are used; always support interpretations with references from the text and embed these references.