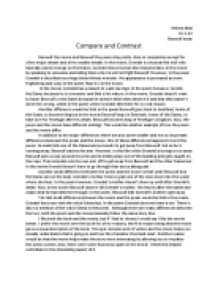 ﻿Helena Neal 10-1-12 Beowulf essay Compare and Contrast Beowulf the movie and Beowulf the poem stay pretty close in comparison except for a few major details and a few smaller details. In the movie, Grendel is a human like troll who basically wants revenge on the Danes. Grendel shows human like characteristics in the movie by speaking to someone and telling them why he will not fight Beowulf. However, in the poem Grendel is described as a huge blood thirsty monster. His appearance is portrayed as more frightening and scary in the poem than it is in the movie. In the movie, Grendel has a reason to want revenge. ...read more.

In addition to the major differences there are also some smaller and not so important differences between the poem and the movie. One of these differences happens to be in the poem. Grendel kills one of the Danes and proceeds to get away from Beowulf, but as he is running away, Beowulf catches his arm. However, in the film while Grendel is trying to run away Beowulf puts a rope around his wrist and Grendel jumps out of the building and gets caught on the rope. Then Grendel cuts his own arm off to get away from Beowulf and the other Danes but in the movie Grendel doesn?t have to go through that excruciating pain. ...read more.

Although there are many differences between the two, both the poem and the movie basically follow the same story line. I like both the book and the movie, but if I had to choose I would say I like the movie better. I prefer the movie over the book for a few reasons, the first reason being that the movie gives a visual description of the book. This epic includes a lot of action and the movie helps you visually understand what is going on and how the characters feel and react. Another reason would be that the movie helps make the story more interesting by allowing you to visualize the action scenes. Also, there were some humorous parts in the movie. I think this helped contribute to the interesting aspect of it. ...read more.