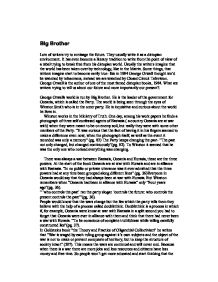 Big Brother and George Orwell - What are writers trying to tell us about our future and more importantly our present?.

Big Brother Lots of writers try to envisage the future. They usually write it as a distopian environment. It has even become a literary tradition to write from the point of view of a rebel trying to break free from his distopian world. Usually the writers imagine that the world has been taken over by technology, like in the Matrix. Some things, that writers imagine start to become eerily true- like in 1984 George Orwell thought we'd be watched by telescreens, instead we are watched by Closed Circuit Television. George Orwell is the author of one of the most famed distopian books, 1984. What are writers trying to tell us about our future and more importantly our present?. George Orwells world is run by Big Brother. He is the leader of the government for Oceania, which is called the Party. The world is being seen through the eyes of Winston Smith who is in the outer party. He is inquisitive and curious about the world he lives in. ...read more.

But Winston remembers when "Oceania had been in alliance with Eurasia" only "Four years ago"(pg. 36). " 'who controls the past' ran the party slogan 'controls the future: who controls the present controls the past'"(pg. 36). People would know that the wars change but the lies which the party tells them they believe with the help of a process called doublethink. Doublethink is a process in which if, for example, Oceania were know at war with Eastasia in a split second you had to forget that Oceania were ever in alliance with them and think that there had never been a war with Eurasia. "To be conscious of complete truthfulness while telling carefully constructed lies"(pg. 37). In Goldsteins book "the Theory and Practice of Oligarchial Collectivism" he writes that "War is waged by each ruling group against it's own subjects and the object of the war is not to make or prevent conquests of territory, but to keep the structure of society intact" (207). This means the wars are continual and will never end. ...read more.

In every party members home is a telescreen. Proles tend not to have them as they can't afford them and they don't need to be watched. Telescreens do resemble televisions except there is only one channel and you can never turn it off. Everything on the telescreen is run by the Party. You can be watched and heard by telescreens. This is shown when Winston does his excersize in front of the telescreen in the morning and the woman on it shouts at Winston "6079 Smith W! Yes, you! Bend lower please!" (pg. 39). When Winston goes to O'Briens house he turned his telescreen off "We have the privilege" meaning inner party members. Across the hall from Winston lives a couple and their children. Winston went over to unblock a drain for Mrs. Parsons and he met their two young children aboy, nine and a girl aged seven. Winston thought their flat looked "battered, trampled on" and it looked like "Some large violent animal" (pg 23) had visited it. The two children were wearing the uniform of the spies which is red neckerchiefs, blue shorts and grey shirts. ...read more.