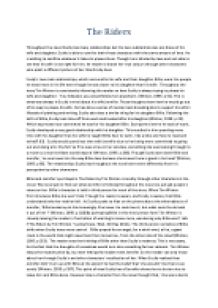 Billie and Jennifers portrayal in The Riders by Tim Winton is mostly through other characters in the novel.

﻿The Riders Throughout the novel Scully has many relationships but the two substantial ones are those of his wife and daughter. Scully is able to care for both these characters with the same amount of love. He is whiling to sacrifice whatever it takes to please them. Though he is blinded by love and not able to see that his wife is not right for him, he reader is shown her true colours through other characters who paint a different picture of her than Scully does. Scully?s two main relationships, which are Jennifer his wife and their daughter Billie, were the people he loved most in his life even though he was closer to his daughter than his wife. Throughout the story Tim Winton is consistently informing the reader on how Scully is always trying to please his wife and daughter. ?You followed, you would follow her anywhere?, (Winton, 1995: p 41). This is what was always in Scully?s mind about his wife Jennifer. These thoughts show how he would go out of his way to please his wife. ...read more.

(Winton, 1995: p 106)By portraying Billie in this third person form Tim Winton is cleverly leaving the reader in frustration of wanting to know more, wondering why Billie won?t talk ("The Riders by Tim Winton." Lynley Stace. Web. 24 May 2012.). The third person narrative of Billie shifts when Scully loses more control. ?Billie prayed for an angel, for a whirl wind, a fire, a giant crack in the world that might save them from tomorrow , from the other side of the cloud?(Winton, 1995: p 253). The reader sees the thinking of Billie other than Scully?s madness. This is necessary, for the fact that the thoughts of a madman would turn into something far less rational. Tim Winton keeps the mystery alive by, by never letting the reader meet Jennifer. So the reader can only know about her through Scully?s and other characters? recollection of her. When Scully realised that Jennifer didn?t turn up with Billie at the airport he had the belief that ?she wouldn?t be that cruel, surely? (Winton, 1995: p 107). This point of view Scully has of Jennifer shows her to be too nice to leave him and Billie alone. ...read more.

Jennifer seemed to believe that being in Europe would somehow improve her writing and artistic skills. Tim Winton describes Jennifer as a character who is lost on what she wants in life nothing satisfies her and is always seeking for more. ?Well, she was bored with her job, and restless, and I was game for a change? (Winton, 1995: p 40). This is one of many statements spoken by Scully that show us the kind of spontaneous person Jennifer was. Billie and Jennifer are two major parts of Scully?s life so when Jennifer disappeared Scully feels like his life has been destroyed. This is mostly due to the fact he was unable see who Jennifer really was like other characters. But then again, the other characters may well not be seeing who Jennifer really is. Tim Winton is able to make the reader raise all these questions simply by hiding characters thoughts. In the case of Billie why doesn?t she just tell her father why her mother didn?t come on the flight with her? But this is all disclosed by her silence and the third person?s narrative of her. Scully is a family man who will do anything for his wife and daughter, but the question is would they be able to do the same. ...read more.