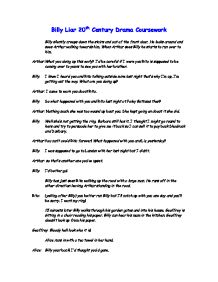 Billy Liar 20th Century Drama Coursework Billy silently creeps down the stairs and out of the front door. He looks around and sees Arthur walking towards him. When Arthur sees Billy he starts to run over to him. Arthur: What you doing up this early? I'd be careful if I were you Rita is supposed to be coming over to yours to see you with her brother. Billy: I know I heard you and Rita talking outside mine last night that's why I'm up, I'm getting out the way. What are you doing up? Arthur: I came to warn you about Rita. Billy: So what happened with you and Rita last night at Foley Bottoms then? Arthur: Nothing much she was too wound up bout you. She kept going on about it she did. Billy: Well she's not getting the ring. Barbara still has it. I thought I might go round to hers and try to persuade her to give me it back so I can sell it to pay back Shadrack and Duxbury. Arthur: You can't avoid Rita forever! What happened with you and Liz yesterday? Billy: I was supposed to go to London with her last night but I didn't. ...read more.

Barbara: Bye then Billy Billy: See you around Barbara leaves. Alice comes out of the kitchen Alice: Is it over between you two them? Billy: yes Alice: I really liked her Geoffrey comes back Geoffrey: Do you know that girl Liz or what evaer her name is, the one you were involved with (talking to Billy) well shes gone off again, she will never settle down. Billy: Shes not the type to settle down Billy gets up and walks towards the living room door and up the stairs, his hands are in his pockets. Looking at the ground. He lays on his bed put his hands behind his head and sighs. Conclusion At the end of the play Geffrey has just told Billy about Liz going off again. Billy is upset about this news that is why he goes off up to his room at the end. He realises that all his lies have, in the end, left him with nothing he lied to get in the first place. He now has to pay back Shadrack and Duxburys with the money he will get from selling the ring. Rita gives up on Billy and starts going out with Arthur. ...read more.

Barbara is wearing a tweed suit and flat shoes unlike Rita wearing a short skirt and heels. Billy does not sound surprised when he asked where the rig is because he was expecting it. Barbara keeps it with her because she still ahs feelings for Billy. Billy trys to get the ring off of herby not sounding as if he wants it back. When Billy asks if Rita had been round he knew then answer would be no but he was trying to make conversation. Barbara gives Billy the ring because she thinks it's what he wants, really she wanted to forgive him and still get married. Alice is disappointed that Billy and Barbara are over. Geoffrey comes home happier than he was . When he tells Billy about Liz goin away again he watches Billy carefully to see what he does. At the end Billy knows that he has messed up and that lying gets you nowhere. He has lost 3 girls on a day. He is depressed and sad. The fact his nan is dead also hits him. All of the scene would have Billy as then main subject with lighting in him. There is only music when Billy comes back through his garden gate when he is whistling. ...read more.