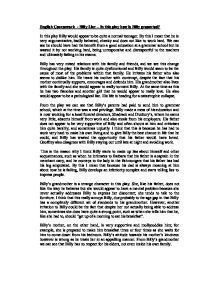 Billy Liar - In this play how is Billy presented?

English Coursework - Billy Liar - In this play how is Billy presented? In this play Billy would appear to be quite a normal teenager. By this I mean that he is very argumentative, badly behaved, cheeky and does not like to work hard. We can see he should have had the benefit from a good education at a grammar school but he wasted it by not working hard, being unresponsive and disrespectful to the teachers and ultimately failing in his exams. Billy has very mixed relations with his family and friends, and we see this change throughout the play. His family is quite dysfunctional and Billy would seem to be the cause of most of the problems within that family. He irritates his father who also seems to dislike him. He treats his mother with contempt, despite the fact that his mother continually supports, encourages and defends him. His grandmother also lives with the family and she would appear to really torment Billy. At the same time as this he has two fianc�es and another girl that he would appear to really love. He also would appear to be a pathological liar. His life is heading for a catastrophic collapse. From the play we can see that Billy's parents had paid to send him to grammar school, which at the time was a real privilege. Billy made a mess of his education and is now working for a local funeral directors, Shadrack and Duxbury's, where he earns very little, absents himself from work and also steals from his employers. ...read more.

If this happens to a person for a number of years they will probably loose self-confidence and feel that their achievements in life are nothing to be proud of. This, however, would only explain why Billy lies about his job with Danny Boon in London. I think that the reason he lies about the occupation of his Dad is because he is embarrassed about most aspects of his father's character; embarrassed that his father was a conscientious objector in the war; he would not appear to be too proud of the job that his father does, therefore he tells his friends that his dad is a captain of a merchant tanker, which at the time was a very impressive job. I think also that he tells lies to people at shops because he does not have much to talk about; his life is uneventful and boring. For instance, he tells the woman in the fish shop that his father has had his leg amputated. I think that he does this partly for sympathy and partly for attention. There is no explanation for Billy having three girlfriends. However it is possible to look at why he is going out with the three girls. The reason I believe that he is going out with Barbara is that she seems to be quite gullible and believes a lot of the stories that he makes up. ...read more.

I think that Billy's father needs to be a little more understanding towards him regarding work and Billy's social life. Although his father comes from a different generation he should understand that teenagers are bound to stay out with their friends until the next morning, so I don not think Billy's parents are right to criticise him on that count. However it would appear that his parents worked really hard to be able to send him to a grammar school and Billy has made a mockery of their generosity by not repaying their sacrifices and working to the best of his potential. This could also be another reason for his lie about a script writing job with Danny Boon; he possibly feels embarrassed that he is working with Arthur who did not go to a big impressive grammar school, so Billy has to make something up so that he does not feel as though he is failing. An overall summary of this play would be that Billy's father's criticisms over his life have led to Billy developing an inferiority complex which leads to him lying a lot which eventually leads to the crumbling of his world. So to conclude, Billy is presented in this play as a lazy, rude, foolish and dishonest young man who needs to reform his ways, but it would not appear that he can. We see this from the closing scene where Billy re-enters his house and starts conducting an imaginary orchestra. Richard Smith 11J ...read more.