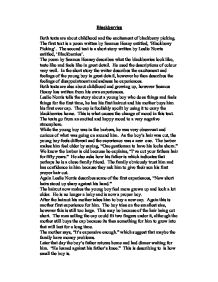 Blackberries Both texts are about childhood and the excitement of blackberry picking. The first text is a poem written by Seamus Heany entitled, 'Blackberry Picking'. The second text is a short story written by Leslie Norris entitled, 'Blackberries'. The poem by Seamus Heaney describes what the blackberries look like, taste like and feels like in great detail. He used the descriptions of colour very well. In the short story the writer describes the excitement and feelings of the young boy in great detail, however he then describes the feelings of disappointment and sadness he experiences. Both texts are also about childhood and growing up, however Seamus Heany has written from his own experiences. Leslie Norris tells the story about a young boy who does things and feels things for the first time, he has his first haircut and his mother buys him his first ever cap. ...read more.

The haircut now makes the young boy feel more grown up and look a lot older. He is no longer a baby and is now a proper boy. After the haircut his mother takes him to buy a new cap. Again this is another first experience for him. The boy tries on the smallest size, however this is still too large. This may be because of the hair being cut short. The man selling the cap could fit two fingers under it, although the mother still buys the cap because its then something for him to grow into that will last for a long time. The mother says, "It's expensive enough." which suggest that maybe the family have money problems. Later that day the boy's father returns home and had dinner waiting for him. "He leaned against his father's knee." This is describing to is how small the boy is. ...read more.

This is now where the change of mood kicks in. "It was a stupid thing to do, utterly stupid. What were you thinking of?" The mother is clearly angry and this highlights the money problems again. Her reaction to what they did is her face turns red and distorted and her voice shrill. As the boys parents start to argue the boy is witnessing them arguing for the first time. He is obviously upset by this. "He began to cry quietly to himself." It seems is trying not to show that he is upset. He is trying to be a big brave boy. "The child began to understand that they were different people." The writer indicates that the boy is seeing his parents in a new light. Maybe thought now he has seen the real people that they are and he was clearly disturbed by this. The last sentence of the text is, "...that he must learn sometimes to be alone." Perhaps the young boy feels he caused the argument and he didn't want to see his parents argue. ...read more.