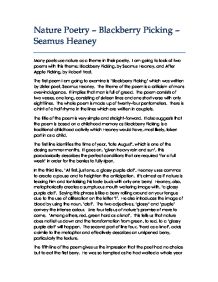 Nature Poetry - Blackberry Picking - Seamus Heaney Many poets use nature as a theme in their poetry. I am going to look at two poems with this theme; Blackberry Picking, by Seamus Heaney, and After Apple Picking, by Robert Frost. The first poem I am going to examine is 'Blackberry Picking' which was written by Ulster poet, Seamus Heaney. The theme of the poem is a criticism of mans over-indulgence. It implies that man is full of greed. The poem consists of two verses, one long, consisting of sixteen lines and one short verse with only eight lines. The whole poem is made up of twenty-four pentameters. There is a hint of a half rhyme in the lines which are written in couplets. The title of the poem is very simple and straight-forward. It also suggests that the poem is based on a childhood memory as Blackberry Picking is a traditional childhood activity which Heaney would have, most likely, taken part in as a child. The first line identifies the time of year, 'late August', which is one of the closing summer months. It goes on, 'given heavy rain and sun', this paradoxically describes the perfect conditions that are required 'for a full week' in order for the berries to fully ripen. ...read more.

This again ties in with the 'glossy purple clots'. These 'stains on the tongue' also gave them the urge to go out and pick more berries. This emphasises how good that first berry tasted! This lust is the same lust that sent Wordsworth out 'Nutting'! Lines eight and nine say, 'Then red ones inked up and that hunger sent us out with milk-cans, pea-tins, jam-pots'. Heaney creates an image in our head of the berries being inked up. This is very effective because it is easy to visualise the berries being 'coloured in'. The combination of the red berry and the blue ink makes purple. The word 'hunger' at the end of line eight ties in with the 'lust for picking'. This tells us that the berries are irresistible! The start of the ninth line shows that their 'hunger' made them eager to get out picking. Line ten,' Where briars scratched and wet grass bleached our boots,' shows close similarities to Wordsworth's 'Nutting'. In Wordsworth's poem he describes how his old clothes had the 'power to smile at thorns, brakes and brambles'. He uses personification, which Heaney also uses to emphasise the actions of the briars. He also uses an effective verb, 'bleaches' to describe the discolouration of his boots. 'Round hayfields, cornfields and potato-drills', tells us that they were willing to go anywhere in order to get more berries. ...read more.

The mould is described as a 'rat-grey fungus'. The inclusion of the word 'rat' in the metaphor emphasises the abhorrence of this deterioration. The smell and taste are focused on too. 'Stinking' emphasises the horrid smell and the once sweet taste of the blackberries turns sour and inedible. The following line reminds us that the poet is speaking as if from a child's point of view, 'I always felt like crying. It wasn't fair'. Then once again the smell of the berries is mentioned, 'all the lovely canfuls smelt of rot'. In the last line, Heaney remembers that he always hoped the blackberries would last once they had been picked, but inside realised that this was impossible. Blackberry Picking begins centred on childhood memories which are innocent at the time. They are pleasurable experiences rooted in nature but they end in disillusion. The desire for the experience ends in revulsion. There is a parallel in the structure between Blackberry Picking and another poem by Seamus Heaney, 'Death of a Naturalist'. This is because the first verse in each poem is longer. The second verse in each poem is exactly half the length of the first. Heaney confronts all of the senses with his imagery and hints among his initial admiration and enjoyment that things are perhaps not always what they are made out to be. The innocence of childhood and the wonders of nature are momentary, and disappointment has to be confronted. ...read more.