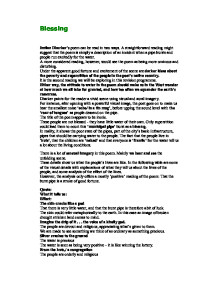 Blessing Imtiaz Dharker's poem can be read in two ways. A straightforward reading might suggest that the poem is simply a description of an incident when a pipe bursts and people run excitedly for the water.

Blessing Imtiaz Dharker's poem can be read in two ways. A straightforward reading might suggest that the poem is simply a description of an incident when a pipe bursts and people run excitedly for the water. A more considered reading, however, would see the poem as being more ominous and disturbing. Under the apparent good fortune and excitement of the scene are darker ideas about the poverty and superstition of the people in the poet's native country. It is the second reading we will be exploring in this revision programme. Either way, the attitude to water in the poem should make us in the West wonder at how much we all take for granted, and how too often we squander the earth's resources. Dharker paints for the reader a vivid scene using visual and aural imagery. For instance, after opening with a powerful visual image, the poet goes on to make us hear the smallest noise 'echo/ in a tin mug', before upping the sound level with the 'roar of tongues' as people descend on the pipe. ...read more.

However, the analysis only offers a mostly 'positive' reading of the poem: That the burst pipe is a stroke of good fortune. Quote: What it tells us: Effect: The skin cracks like a pod That there is very little water, and that the burst pipe is therefore a bit of luck. The skin could refer metaphorically to the earth. In this case an image of broken drought stricken land comes to mind. Imagine the drip of it . . . the voice of a kindly god. The people are devout and religious, appreciating what's given to them. We are made to see something we think of as ordinary as something precious. Silver crashes to the ground The water is precious The water is seen as being very positive - it is like winning the lottery. From the huts,/ a congregation The people are orderly and religious They appreciate what God has done for them Naked children The society is not embarrassed by nudity ...read more.

At first it seems just an exciting occasion vividly brought to life. However from the first line there is a sense of something darker, and harder hitting. The layers of the poem reflect the way different people will see the same scene/culuture differently. Attitude The poet appears at first to be objective, describing but not commenting on the incident. And to some extent she leaves the reader to decide the feeling and meaning of the poem. Perhaps though there is horror and pity in that opening image of skin cracking 'like a pod'. To me the poem seems like a lament for the poverty of these people and for the value system that keeps them poor, yet humble and thankful. Style Dharker uses sensual imagery to evoke the scene, and builds the rhythm of the poem into a crescendo at the bursting of the pipe. She uses an extended metaphor, comparing water to a god. She makes lines intentionally ambiguous, uncertain, so that the scene can be interpreted in more than one way. ?? ?? ?? ?? ...read more.