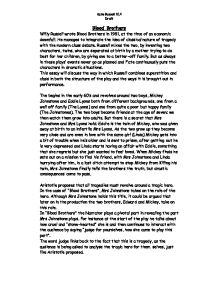 Blood Brothers Willy Russell wrote Blood Brothers in 1981, at the time of an economic downfall. He manages to integrate the idea of classical nature of tragedy with the modern class debate. Russell mixes the two, by inventing two characters, twins, who are separated at birth by a mother trying to do best for her children, by giving one to a better-off family. But as always in these plays' events never go as planned and Fate continuously puts the characters in dramatic situations. This essay will discuss the way in which Russell combines superstition and class in both the structure of the play and the ways it is brought out in performance. The begins in the early 60's and revolves around two boys, Mickey Johnstone and Eddie Lyons both from different backgrounds, one from a well off family (The Lyons) and one from quite a poor but happy family (The Johnstones). The two boys become friends at the age of seven; we then watch them grow into adults. But there is a secret that Mrs Johnstone and Mrs Lyons hold; Eddie is the twin of Mickey, who was given away at birth to an infertile Mrs Lyons. As the two grow up they become very close and are even in love with the same girl (Linda) Mickey gets into a bit of trouble when he's older and is sent to prison, after getting out he is very depressed and Linda starts having an affair with Eddie, something that she regrets but she just wanted to feel loved. ...read more.

His dress sense also gives the audience the idea he is dressed for a dark occasion, such as a funeral. This fits in with the idea that he represents Fate, because he knows they are going to die. During the time when Willy wrote this play, social class difference was a strong talking point, this is well put across from start to finish in the performance, through clothing, setting and language. The language is paramount to the idea of social structure, as it appears so often. A prime example of this is when Mickey and Eddy first meet and Mickey teaches Eddy taboo words, such as "pissed" and "the F word". The fact that Mickey knows these words proposes he has been allowed to have the exposure to these words as he hasn't had the money to occupy himself in other ways. Russell's use of colloquial language, swearing and abbreviated speech, linked with a varying vocabulary, between the two 7 year olds is intended to indicate to the audience the way in which their upbringing have already, even at this young age, affected their ability to operate in society. He wants the audience to recognize that the boy's different class background differs with great intensity. At the age of seven when the twins first meet the up-bringing they have had becomes extremely apparent through Russell's excellent use of language in the dialogue. When talking about their mothers, Mickey uses the term "mam", this signifies that Mickey is from a poorer background as the audience would generally link this sort of language with someone from a poorer, un-educated background. ...read more.

Too add to this there is a song called "That Guy" in the play, Mickey and Edward both sing this song. A line in the songs says "I wish I was a bit like that guy", It is all about how they want to be each other and want to live the other ones life; this is dramatic irony as they could have been each other if Mrs Lyons was to go for the other child. So once again it all falls back on that fatal decision she made. If she hadn't had separated them at birth, would they be the people they are now? Willy Russell very cleverly makes structural foreshadowing a pressing point in the play. There are some really bold examples throughout the play. Through different stage of growing up Mickey always has a gun involved in his day to day life, for instance when he is really young they play cowboys and Indians and he shoots people with his toy gun and when Sammy comes home after the shooting of a man he hides it under a floor board. This proves vital as when Mickey actually comes to shooting Eddy like he used to when they were young he uses the one from under the floor boards. To add to this Edward has always been the one giving Mickey stuff, when they were little it was small thing such as giving him a sweet, then in teenage years it advances to cigarettes and finally in adulthood he ends up giving him a home and a job. ** Conclusion- Speak to sir about it! ** ?? ?? ?? ?? Katie Russell 10.4 Draft ...read more.