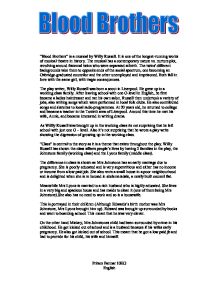 "Blood Brothers" is a musical by Willy Russell. It is one of the longest-running works of musical theatre in history. The musical has a contemporary nature vs. nurture plot, revolving around fraternal twins who were separated at birth. The twins' different backgrounds take them to opposite ends of the social spectrum, one becoming an Oxbridge-graduated councilor and the other unemployed and imprisoned. Both fall in love with the same girl, with tragic consequences. The play writer, Willy Russell was born a scout in Liverpool. He grew up in a working class family. After leaving school with one O-level in English, he first became a ladies hairdresser and ran his own salon. Russell then undertook a variety of jobs, also writing songs which were performed in local folk clubs. He also contributed songs and sketches to local radio programmes. At 20 years old, he returned to college and became a teacher in the Toxteth area of Liverpool. ...read more.

She lives in a very big and spacious house and has maids to clean it (one of them being Mrs Johnstone).She also has no need to work and so is a housewife. This is portrayed in their children (Although Edwards's birth mother was Mrs Johnstone, Mrs Lyons brought him up). Edward was brought up surrounded by books and went to boarding school. This meant that he was very clever. On the other hand Mickey, Mrs Johnstones child had been surrounded by crime in his childhood. He got kicked out of school and is a husband because if his wifes early pregnancy. He also got kicked out of school. This meant that he got a low paid jb and had to provide for his child, his wife and himself. Another thing that shows class differences is when Mickey and Edward are playing. When Mickey's mother asks him where he is going he says "up the park" This suggests that the other side of the park is untouchable and that the park also separates the different classes. ...read more.

He presents this by splitting two twins at birth and tells of how they were brought up in very different ways, one in a rich and posh family, Eddie, and one in a big, poor family, Mickey. He does not go into any detail about how exactly they are brought up, however, it is quite clear that Eddie has been to a private school and has had a lot of attention in the first seven years of his life. On the other hand, Mickey appears to have not received much attention and would almost definitely have gone to a poor school. When they meet, the simple fact that they do not realise that they're twins: especially when they find out that their birthdays are on the same day, shows that their physical appearances must have been changed quite a lot by their parents and environment. Mickey: "What's your birthday?" Eddie: "July the eighteenth." Mickey: "So is mine." ?? ?? ?? ?? Pritam Parmar 10HG English ...read more.

The candidate's question is unclear here, but it appears to be a summary of the play 'Blood Brothers'. The candidate makes a good effort and raises some good points about the play, but a lot of time is dedicated to ...

The candidate's question is unclear here, but it appears to be a summary of the play 'Blood Brothers'. The candidate makes a good effort and raises some good points about the play, but a lot of time is dedicated to Willy Russell and this elicits no marks as the question would naturally focus on the play. Candidates are often misconstrued into thinking that talking about the playwright will earn marks when if fact it simple wastes time. As a result, I would recommend the candidate simply mention that the play is written by Willy Russell, a man who had grown up in a disadvantages area in Liverpool and so some of the events of 'Blood Brothers' may be informed by his own childhood/adulthood experiences.

The candidate displays a good knowledge of the occurrences in the play and the characters within it. I would like to see more appreciation of the interactions between the characters and more focus on more of the themes, rather than simply the socio-economic divide. This would give the examiner the impression of a more holistic understanding of the play and it's purpose. It is important to talk about the purpose of the play - of any play - because plays are written for a reason. They are made to make the audience think and so the candidate should also refer to how the audience are affected (e.g. instead of saying: "The difference in class is shown as Mrs Johnstone has an early marriage due to pregnancy. She is poorly educated and is very superstitious and either has no income or income from a low paid job", the candidate could add "This makes the audience assume that Mrs. Johnstone may be poorly educated, hence her superstitious nature". Plays are written for audiences, so the effect of the plays dramatic techniques should be noted with reference to the audience.

The Quality of Written Communication here is fine - all grammar, spelling and punctuation and accurate for the most-part, though naturally some errors slip though. This is why it is good practice to ensure a proof-read and spell-check of every essay before the final hand-in date for coursework, because even without realising, there could be errors in the final draft.