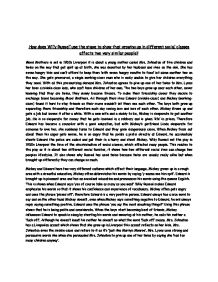 How does Willy Russell use the stage to show that growing up in different social classes affects two very similar people? Blood Brothers is set in 1950s Liverpool it is about a young mother called Mrs. Johnston of five children and twins on the way that get split up at birth, she was deserted by her husband and lives on the doll. She has seven hungry kids and can't afford to keep them 'with seven hungry mouths to feed' let alone another two on the way. She gets pressured, a single working-class mum who is sadly unable to give her children everything they need. With all this pressurizing demand Mrs. Johnston agrees to give up one of her twins to Mrs. Lyons her boss a middle-class lady, who can't have children of her own. The two boys grow up near each other, never knowing that they are twins, they slowly become friends. To make their friendship closer they decide to exchange blood becoming Blood Brothers. All through their lives Edward (middle-class) and Mickey (working-class) found it hard to stay friends as their mums wouldn't let them see each other. The boys both grow up separating there friendship and therefore each day seeing less and less of each other. Mickey Grows up and gets a job but looses it after a while. ...read more.

Russell has ensured that from the outset Mrs. Lyons' and Mrs. Johnstone's behavior, and the respect they show for other people, are noticeably different. Middle class Mrs. Lyons speaks to people in Standard English and shows respect for other people. When she asks 'Hello Mrs. J. How are you?' she is very polite to her cleaner, asking after her, but also being over familiar with her, shortening her name and being condescending about her superstitions and 'piles.' Her working class parallel, Mrs. Johnston, however, speaks to people with a lack of respect, using non-Standard English. She is disrespectful to most people she talks to, asking the tradesman rudely 'What are you doing here? The milk bill is not due till Thursday?' which reveals that she has no respect for anyone. The parents' behavior will, the audience understands influence the behavior of their children to demonstrate respect, or lack of respect, for people. As children, Sammy and Mickey are clearly influenced by their mother. 'Mother...will y' open the bleedin' door or what?' (Mickey) Mickey sits, bored, looking at the ants on the pavement (Stage directions describing Mickey playing on his own) I'm just thinkin'...you've not had much of a life with me, have y'?' (Mrs. J to Mickey) Edward is similarly influenced by his mother, he is brought up to have respect for people and speak using Standard English (although sometimes his language changes when he is around Mickey), 'Don't you know what a dictionary is? ...read more.

Johnston. We don't ever see the inside Mrs Johnstone's house but the outside shows that it's dirty with furniture being removed, it is also very small compared to the Lyons house as we learn in the song My Child, this use of props stresses the difference in social class. The props are also very different for each family: again, in My Child 'A bike with both wheels on?' reveals that Mrs Johnston is surprised because Edward is going to have what we would see as a normal childhood possession - revealing the extent of her poverty, this is influential because of her giving up Edward in the first place. The costumes and props that both classes use are effective because they both have props and costumes to match there class. All Social classes are different depending on the language, mannerisms, clothing, education, and behavior. This play shows that two very similar people can change and become very different from each other; they can grow up in the same area but live completely different lifestyles and have very different attitudes. Willy Russell uses 1950s Liverpool as a setting as there was an extreme difference between class and wealth, whether rich or poor you will always grow up in different lifestyles. Russell wanted to show how people from different social classes have different life experiences by showing two boys which are very similar and turn out to be the opposite of each other. ...read more.