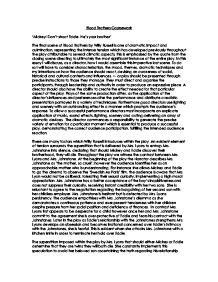 Blood Brothers Coursework 'Mickey! Don't shoot Eddie. He's your brother' The final scene of Blood Brothers by w***y Russell is one of dramatic impact and culmination, representing the intense tension which has developed previously throughout the play attributable to several climatic aspects, this is emphasised by the quote from the closing scene directing to ultimately the most significant instance of the entire play. In this essay I will discuss, as a director, how I would assemble this imperative last scene. To do so I will have to consider characterisation, the mood, themes, dramatic techniques and my intentions on how the audience should react, devising an awareness of social, historical and cultural contexts and influences. =- or play should be presented through precise instructions to those they manage. They must direct and organise the participants, through leadership and authority in order to produce an expressive piece. A director should also have the ability to create the effect needed for that particular aspect of the play. Plays of the same production differ, as the application of the director's influences and preferences alter the performance and distribute a realistic presentation portrayed in a variety of techniques. Furthermore good directors use lighting and scenery with an outstanding effect in a manner which prompts the audience's response. To allow a successful performance directors must incorporate an explicate application of music, sound effects, lighting, scenery and acting delivering an array of dramatic devices. ...read more.

Furthermore the narrator continuously questions the responsible source of the twin's deaths inquiring if it is fate, superstition, or " 'And do we blame superstition for what came to pass, or is it what we have come to know as class?" Distinctly the deliberation that the play was set in an economically depressed, socially divided Britain enables the audience to deduce the correct explanation. The separation between upper and lower class is portrayed by clothing and lifestyles, especially properties and possessions. He cleverly divides the stage into halves with one projecting the Lyon's as civilised high class characters through the use of sophisticated rooms and expensive furnishings. Whereas Mrs Johnstone and her children were represented by inadequate living conditions. There was a great contrast in lighting between the countryside and the city. In the countryside it was bright and the scenery consisted of typical green covered hills and a crystal blue sky. However in the city the lighting was much darker and the scenery consisted of buildings and skyscrapers. A spot light was used in several parts of the play to follow predominant and important characters. Although another aspect that confronts the situation between classes is the language and the way they present themselves to the audience. There are also comparisons between the different classes. This is relevant as during this time because these differences could be frequently found in Liverpool. ...read more.

'You, You, Why couldn't you have given me away Ma'am... I could have been him' this quote demonstrates the relevance of envy Mickey possesses and his apparent depression. At this phase in the play Mickey has a low self esteem and no confidence and perceives himself as a failure noting Eddie's success he in angered. At the opening of the final scene I would project the stage with a red light; this would be used as an indicator of the bloodshed to follow, thus this would successfully signify the sinister end confirming the myth regarding the separation of twins at birth 'If two twins are separated at birth, if they ever find out the truth they will both die that self same day'. The effect that the red lights would portray is a very definite, passionate and emotional end to the tension that has built up throughout the play; this would generate a tragic atmosphere and entice the audience. Did you ever hear the story of the Johnstone twins? This quote is pronounced in both the first and final scene, the repetition emphasises the importance of the quote, and demonstrates an altered chronological order which entices the audience, as the opening scene reflects the final scene. The final scene reveals a volatile tension which enhances throughout the play, constantly expanding commencing to a suspenseful and expressive final scene deriving the vivid separation between the parted twins. ...read more.