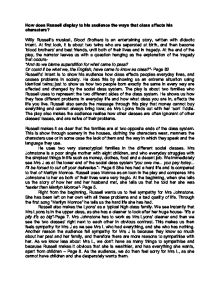 Blood Brothers- How does Russell display to his audience the ways that class affects his characters?

How does Russell display to his audience the ways that class affects his characters? w***y Russell's musical, Blood Brothers is an entertaining story, written with didactic intent. At first look, it is about two twins who are separated at birth, and then become 'blood brothers' and best friends, until both of their lives end in tragedy. At the end of the play, the narrator leaves us with a question hanging as the explanation of the tragedy that occurs- "And do we blame superstition for what came to pass? Or could it be what we, the English, have came to know as class?"- Page 82 Russell's' intent is to show his audience how class effects peoples everyday lives, and causes problems in society. He does this by showing us an extreme situation using identical twins; just to show us how two people born exactly the same in every way are affected and changed by the social class system. The play is about two families who Russell uses to represent the two different sides of the class system. He shows us how they face different problems in everyday life and how what class you are in, affects the life you live. Russell also sends the message through this play that money cannot buy everything and cannot always bring love; as Mrs Lyons finds out with her 'son' Eddie. The play also makes the audience realise how other classes are often ignorant of other classes' issues, and are na�ve of their problems. Russell makes it as clear that the families are at two opposite ends of the class system. ...read more.

Russell puts Mrs Lyons across as a very patronizing character, who is very intimidating and persuasive. Russell shows us how ignorant we are of the issues other classes face daily. He does this by showing us how Mrs Johnstone struggles with trying to pay for milk and other everyday items, whereas Mrs Lyons takes these things for granted. When Mickey and Eddie are introduced into the play (Page 22) we immediately see the different effect of class on their lives as the age of seven. The first way Russell brings us to this difference is their dialogue. Mickey uses Non- Standard English "'Gis a sweet." (Page 22) whereas Eddie uses Standard English "my mummy doesn't allow..." This is one the obvious ways to distinguish between classes. Eddie also doesn't know any swear words and this shows the audience the upbringing he has had compared to Mickey. The boys are a contrast to each other because Mickey has no manners, misbehaves and speaks with a Liverpudlian dialect and Non- Standard English whereas Eddie speaks Standard English, is well mannered and is very well behaved. When Mickey teaches Eddie swear words and we see how he has never been open to this kind of language in the kind of environment he has brought up in. Even when Mickey teaches Eddie the swear words, he does not how to use them in a sentence because he has never been around people who have said them, and never heard them used before. When he gets annoyed with Mrs Lyons he says-"You're...you're a fuckoff!" (Page 29) which just shows how good an upbringing he has had as he uses it in the complete wrong context. ...read more.

On stage he is always somewhere, whether it be in the centre of the stage or hidden at the back. His presence shows the dark and sinister side to the whole story and whenever it seems to be okay, he highlights the dark side of whatever is happening. He is dressed smartly and is very serious. Whenever a major event is about to occur, he will make an entrance to the main focal point of the stage at the time. He has a powerful presence and almost seems to hold the whole musical together, tying up all the loose ends. Throughout the musical he also asks some relevant rhetorical questions at crucial moments to make the audience really think about what is happening. He makes the audience judge the characters and makes us realise that the English social class system is a problem. To conclude the whole musical, I feel that Russell emphasizes every minor detail about the class system which is different from one class to another to make us realise the differences. He uses the narrator to make us think about the different characters and our opinions of them, and he uses the different powers people have in their class to make us feel sympathy for others. He emphasizes every line and scenery on stage to get across his message to the audience that the difference in the class system is a major problem that we have to deal with. I think that Russell feels that the class system will always remain with us, however much it is pointed out and however much it is talked about not everyone can be completely equal, because of the society we live in. We just have to get on and live with the problems, consequences of the class system. ?? ?? ?? ?? ...read more.