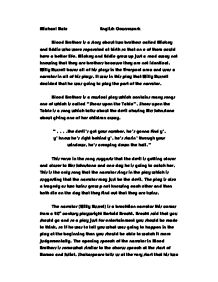 Michael Hale English Coursework Blood Brothers is a story about two brothers called Mickey and Eddie who were separated at birth so that on e of them could have a better life. Mickey and Eddie grow up just a road away not knowing that they are brothers because they are not identical. Willy Russell bases all of his plays in the Liverpool area and uses a narrator in all of his plays. It was in this play that Willy Russell decided that he was going to play the part of the narrator. Blood Brothers is a musical play which contains many songs one of which is called "Shoes upon the Table". Shoes upon the Table is a song which talks about the devil chasing Mrs Johnstone about giving one of her children away. ...read more.

The opening speech of the narrator in Blood Brothers is somewhat similar to the chorus speech at the start of Romeo and Juliet. Shakespeare tells us at the very start that his two main characters are star crossed lovers (their fate was told in the stars) and that they couldn't avoid their fate/destiny. The narrator in Blood Brothers suggests something similar. Blood Brothers is a play about inevitability and the narrator is a personification of fate. The narrator takes on many roles in this play which all move things towards the great tragedy at the end. He starts of as a milkman telling us how Mrs Johnstone has no money and she is pregnant. He is then a Gynaecologist and tells us that Mrs Johnstone is going to have twins. He then becomes a bus conductor and shows us how because of a background of poverty it is leading to crime, ...read more.

Willy Russel makes a comment at the end of the play which tells us what the play is about: ". . . .what we, the English, have come to know as class." Willy Russel is trying to tell us that the play has been about the different classes in society. Working class, middle class and upper class. This play shows how a child brought up in middle class turns out to be like and what a child brought up in working class turns out to be like. I think that the narrator is very important in this play and it is the narrator that keeps the play going, he is the glue which holds the play together. I think the play would be a lot worse/different if the narrator was not included in it. I think that the narrators most important role in the play was the different jobs he took on (e.g- Gynaecologist) these jobs move the play to wards the tragedy at the end of the play. ...read more.