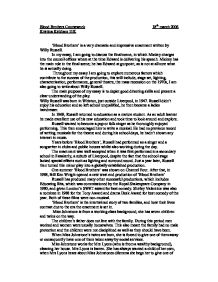 Blood Brothers Coursework 18th march 2006 Kristina Kirkham 11K 'Blood Brothers' is a very dramatic and impressive enactment written by Willy Russell. In my essay, I am going to discuss the final scene, in which Mickey charges into the council offices where at the time Edward is delivering his speech. Mickey has the main role in the final scene; he has Edward at gunpoint, as is not at all sure what he is actually doing. Throughout my essay I am going to explore numerous factors which contribute to the success of the production, this will include, stage set, lighting, characterisation, performance, general theatre, the mass recession on the 1970s, I am also going to write about Willy Russell. The main purpose of my essay is to depict good directing skills and present a clear understanding of the play. Willy Russell was born in Whiston, just outside Liverpool, in 1947. Russell didn't enjoy his education and so left school unqualified, he then became a ladies hairdresser. In 1969, Russell returned to education as a mature student. As an adult learner he made excellent use of his new education and took time to look around and explore. Russell wanted to become a pop or folk singer as he thoroughly enjoyed performing. This then encouraged him to write a musical. He had no previous record of writing musicals for the theatre and during his school days, he hadn't shown any interest in music. ...read more.

Another disadvantage would be that the actors would only be able to enter from the left and right hand sides of the stage. There are, however some advantages of a proscenium stage such as, the actors not having to turn their backs on the audience this would contrast to the event of blocking in the round. Another advantage of this type of stage, is that the set can easily be changed which, contrasts to an in the round stage, where the characters would have to change the set during the production. In the concluding scene of 'Blood Brothers', I am going to have stage props such as a podium and a few chairs facing it, I have chosen to do this because the stage directions state 'we see Edward, standing behind a table, on a platform.' The fact that Edward is raised, gives the impression that he has more status in society and is more important than the others who will be positioned on the stage. The podium will be lowered from the roof of the stage, allowing it to be easily removed from the set. Two other councillors will accompany Edward, however they will not be on any kind of raised platform, as this will still allow Edward to look superior. When Edward has been shot I will remove the podium and chairs. Instantly after Mickey is 'blown away' he will fall next to Edward, this will depict they now both have the same status in society: neither is better that the other, death really is 'the leveller'. ...read more.

There are many organisations such as the 'Socialist Workers Party', which were popular amongst many young people. The mass recession of the 70's caused many problems regarding social class. Most people of working class were forced to have their houses repossessed due to the three-day week regulation. At the time of the recession, people rebelled against most of the government's decisions. A clear example of this would be they way people portrayed their views via fashion. The working class people had a propensity to dress as 'punks' they dressed like this as a way of expressing their opinions and anger. In the enactment, Russell successfully portrays this via the character Miss Johnstone. She is from a working class background and struggles economically during this era. Her son Mickey is also at a disadvantage because of this. His endures a poor education and is suspended from school due to behavioural problems. Mickey was unaffected by this because he assumed he was not going to get a job if he continued learning, due to the circumstances. He was later imprisoned, and became economically depressed. The Lyons, depicted in the play, are a very prosperous family and live a contented life during the 'three day week'. Mr Lyons has a well-paid job, which enables the family to weather the economic crisis. Their son Edward is highly educated which provided him with the opportunity to follow in his father's footsteps. In comparison the two families lead very contrasting lives, which clearly depicts the economic circumstances in the mass recession. ...read more.