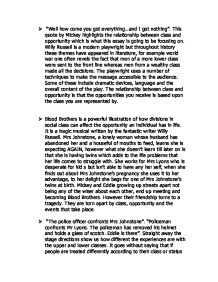 > "Well how come you got everything...and I got nothing". This quote by Mickey highlights the relationship between class and opportunity which is what this essay is going to be focusing on. Willy Russell is a modern playwright but throughout history these themes have appeared in literature, for example world war one often revels the fact that men of a more lower class were sent to the front line whereas men from a wealthy class made all the decisions. The playwright uses a number of techniques to make the message accessible to the audience. Some of these include dramatic devices, language and the overall content of the play. The relationship between class and opportunity is that the opportunities you receive is based upon the class you are represented by. > Blood Brothers is a powerful illustration of how divisions in social class can affect the opportunity an individual has in life. ...read more.

"Policeman confronts Mr Lyons. The policeman has removed his helmet and holds a glass of scotch. Eddie is there". Straight away the stage directions show us how different the experiences are with the upper and lower classes. It goes without saying that if people are treated differently according to their class or status then each opportunity will be different from each class group, society will automatically open some doors for some groups and close them for others. If many were to share the policeman's attitude then its safe to hypothesis that many will be prejudice against the working class, on the other hand its important to consider the fact that some opportunities are out of reach for the upper classes as this can be seen through Eddie's wish to be more like Mickey. 'They are constantly with shaking heads and by the end of the following verse have assembled in the dole office.' ...read more.

For example 'that guy', this song highlights the differences between Eddie and Mickey, it shows that all though Eddie has the most expensive, extravagant lifestyle he wants to be a lot more like Mickey. He wants friends and to do things that resemble Mickey's lifestyle, whereas Mickey wants to be more like Eddie, he wants to live like a prince and enjoy the succulent taste of chewy sweets. > Mickey appears as a childhood terror and a hero-figure for Eddie. We watch as their natural bond unfolds into a blossoming friendship which Mrs. Johnstone and Mrs. Lyons don't agree with due to the fact of their blood relations. You need to understand that the fact that they both are from much different classes highlights that they are limited from a lot of opportunities. We see the brothers start to grow apart because Mickey starts to realise that people from different classes are not to mix, it doesn't seem ethical , for example towards the end of the play ...read more.