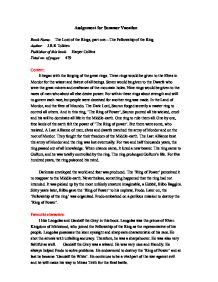 Book report on The Lord of the Rings, part oneThe Fellowship of the Ring.

Assignment for Summer Vacation Book Name: The Lord of the Rings, part one-The Fellowship of the Ring Author: J.R.R Tolkien Publisher of this book: Harper Collins Total no. of pages: 479 Content: It began with the forging of the great rings. Three rings would be given to the Elves in Mordor for the wisest and fairest of all beings. Seven would be given to the Dwarfs who were the great miners and craftsmen of the mountain holes. Nine rings would be given to the races of men who about all else desire power. For within these rings about strength and will to govern each race, but people were deceived for another ring was made. ...read more.

When chance came, it lured a new bearer. The ring came to Gollum, and he was totally controlled by the ring. The ring prolonged Gollum's life. For five hundred years, the ring poisoned his mind. Darkness enveloped the world and fear was produced. The 'Ring of Power' perceived it to reappear to the Middle-earth. Nevertheless, something happened that the ring had not intended. It was picked up by the most unlikely creature imaginable, a Hobbit, Bilbo Baggins. Sixty years later, Bilbo gave the 'Ring of Power' to his nephew, Frodo. Later on, the 'Fellowship of the ring' was organized. Frodo embarked on a perilous mission to destroy the 'Ring of Power'. ...read more.

Arwen is an elf and she is the only daughter of Elrond, the Lord of the Rivendell. She is said to be the most beautiful of all living beings in the Middle-earth. Born to an immortal life as an elf. Arwen must choose between it or the mortal Aragorn. In so doing, she dooms herself to die as a human. That's why I really appreciate her lay down her life for the cause of love. Comment/Reflection: After reading this book, I think this book is merit to read. It is because the plot was very edgy and quite terrible. You can also learn some principles. For example, it teaches me be brave when facing difficulties and also trust your team members. By the way, you can learn a lot of vocabulary from this book as well. ~ The End ~ ...read more.