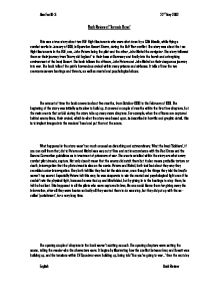 Book Review of 'Tornado Down'.

Book Review of 'Tornado Down' This was a true story about two RAF flight lieutenants who were shot down by a SAM Missile, while flying a combat sortie in January of 1991, in Operation Desert Storm, during the Gulf War conflict. The story was about the two flight lieutenants in the RAF, one, John Peters being the pilot and the other, John Nichol the navigator. The story followed them on their journey from 'Merry old England' to their base at Germany and finally into the harsh and unforgiving environment of the Iraqi Desert. The book follows the officers, John Peters and John Nichol on their dangerous journey into war. The book tells of the pair's horrendous ordeal within many prisons and airbases. It tells of how the two overcame severe beatings and threats, as well as mental and psychological abuse. The amount of time the book covers is about five months, from October 1990 to the February of 1991. The beginning of the story was initially quite slow to build up, it covered a couple of months within the first few chapters, but the main events that unfold during the story take up many more chapters. For example, when the officers are captured behind enemy lines, their ordeal, which is what the story was based upon, is described in horrific and graphic detail, this is to implant images into the readers' head and put them at the scene. What happened in the story wasn't so much unusual as disturbing and extraordinary. What the Iraqi 'Soldiers', if you can call them that, did to Peters and Nichol was way out of line and not in accordance with the Red Cross and the Geneva Convention guidelines as to treatment of prisoners of war. The events entailed within the story are what every combat pilot dreads, capture. Not only does it mean that the enemy did catch them but it also means probable torture or death, interrogation that the pilots dread is also on the cards. ...read more.

What I can't understand, and probably will never have to, is how they felt inside those prisons, their thoughts while being hit in the face with planks of wood and being whipped with hosepipes, they can describe their thoughts in as much detail as possible, but the only people who would fully understand would be people who have suffered in a similar way. There were many different kinds of relationships between all of the characters in the story. A few examples are John Peters and his wife, Helen, have a very stable and loving relationship. They also have two children, Guy, 2, and Toni, born at the beginning of the story, John Peters obviously cares a lot for his children because while in prison in Iraq, his family was all he usually thought about, and when his son Guy had his second birthday, he forgot to buy him a present leaving it all up to Helen. When in prison thinking he might die, he kept feeling guilty about not having spent more time with his family, and he especially regretted not buying his son a birthday present. He kept thinking that if he was kept in prison for a long time his son might forget who his daddy was. This upset Peters a lot; he regretted many things while in prison and swore to himself, that he would try to make it all right. This shows how Peters was a loving man, he had forgotten his sons birthday present, but he was going to make it up to him, and he was going to spend a lot more time with his family, one member of which he hardly knew. There are also many other relationships happening throughout the story. All the members of XV Squadron are like a family, a great big network of people who make everything, wherever they are work together. They are all such good friends and as such they trust each other enormously. ...read more.

There are no improvements as such that I would make to the story. To change anything would be obtuse, and because it is a true story the story line can't really be changed. The reason for the Peters and Nichol to write this story is to inform. They wanted the public to know what it was like for them during that terrible time. While reading the story I felt a lot of compassion for Peters and Nichol, I felt sympathetic and sorry for them. It must have been such a harrowing experience for them, and to come out on the other side relatively unscathed and intact. I learned many things from the story about people and different cultures. The way they were treated in Iraq seemed unethical to me and probably would to most people in the Western World, but to a majority of people in places like Iraq the type of interrogation, torture and imprisonment that our allied soldiers were subject to, would probably seem acceptable, even though treaties like the Geneva Convention prevent such cruelty. When I juxtapose this book with others that I have read recently I can see that it captured my imagination in a way that no other has. It really made me think about lots of things, things in my own life, things in others lives, and how terrible ordeals can affect your way of life. The book did all of these things to me because it was really very good; it made me think, seriously, which not many books could do. I would definitely recommend this book to anyone. It is a book that can make you look at life retrospectively, as Peters and Nichol have done. It will make you think, it will make you look at your life from another perspective, and may change you psychologically. Certainly a must-read book for anyone interested in the Gulf conflict. Or if you just fancy a good book to read then 'Tornado Down' is definitely my recommendation for you. Alex Fox 10-3 22nd May 2002 English Book Review ...read more.