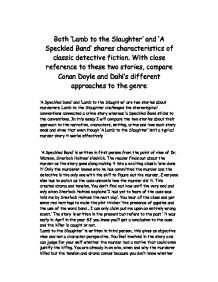 Both &amp;#145;Lamb to the Slaughter&amp;#146; and &amp;#145;A Speckled Band&amp;#146; shares characteristics of classic detective fiction. With close reference to these two stories, compare Conan Doyle and Dahl&amp;#146;s different approaches to the genre

Both 'Lamb to the Slaughter' and 'A Speckled Band' shares characteristics of classic detective fiction. With close reference to these two stories, compare Conan Doyle and Dahl's different approaches to the genre 'A Speckled band' and 'Lamb to the Slaughter' are two stories about murderers. Lamb to the Slaughter challenges the stereotypical conventions connected a crime story whereas 'a Speckled Band sticks to the conventions. In this essay I will compare the two stories about their approach to the narration, characters, setting, crime and how each story ends and show that even though 'A Lamb to the Slaughter' isn't a typical murder story it works effectively 'A Speckled Band' is written in first person from the point of view of Dr. Watson, Sherlock Holmes' sidekick. The reader finds out about the murder as the story goes along making it into a exciting classic 'who done it' Only the murderer knows who he has committed the murder and the detective is the only one with the skill to figure out the murder. Everyone else has to watch as the case unravels how the murder did it. This creates drama and tension. You don't find out how until the very end and only when Sherlock Holmes explains 'I had yet to learn of the case was told me by Sherlock Holmes the next day'. You hear all the clues and get some red herrings to make the plot thicker 'the presence of gypsies and the use of the word band... I can only claim put me upon an entirely wrong scent.' The story is written in the present but refers to the past ' it was early in April in the year 83' you know you'll get a conclusion to the case and the killer is caught or not. 'Lamb to the Slaughter' is written in third person, this gives an objective view and not a character perspective. ...read more.

The murderer in 'a lamb to the slaughter' is called Mary Maloney she is a vulnerable, pregnant woman. The reader is made to feel like she is the victim because her husband is grumpy and horrible to her, and is planning to live her, because she is pregnant she needs protecting. She treats her husband well doesn't know that her husband is going to leave her. She doesn't plan the murder and it is more an act of revenge and shock. Directly after the murder she can't believe she has killed Mr Maloney. After she clams down she plans how to get away with the murder, she goes to the shops to confirm an alibi, and then she calls the police and starts playing a victim of the murder. It is easy to do this because the state of shock she is in and the stupidity of the police. Mrs Maloney is the opposite of Dr Grimesby Roylott, she gets the readers sympathy and the reader can understand the emotions she felt but Dr Grimesby Roylott didn't have a good reason for his murder, his was premeditated and he tried to kill again. The victims in 'a speckled band' are twins, one was murdered before (Julia Stoner) and the second was an attempted murder (Helen Stoner.) Helen's eyes are described as 'those of some hunted animal' and her stepfather is hunting her. Both victims lived with their stepfather in an old mansion which the most of the rooms were inhibited. They were only two years old when their mother remarried and therefore Dr Grimesby Roylott was a father figure to them. Both victims were female and both due to get married and to be were left with a considerable amount of money from their mother to receive when they got married. 'Julia... met a half pay major of the marines to whom she became engaged' This creates sympathy because they were both venerable and innocent. ...read more.

I sympathise with Mr Maloney at the end of the story because she is now on her own with a child and having to live with the guilt of killing her husband even though she got away with the murder. She cares about her child because if she didn't have the baby then she would have turned herself in. 'she knew quite well what the penalty would be that was fine it made no difference to her, it would be a relief. On the other hand what about her child?' I think Mrs Maloney was so angry with her husband leaving her and been on her own with a child. 'A Speckled Band' has a kind of happy ending because the killer has been caught, Helen Stoner could now go and get married and even sell the mansion. Sherlock Holmes is now a hero and everything worked out. 'A lamb to the Slaughter' may not be a typical murder story but it still gives the same emotions of drama, suspense and humour. 'A Speckled Band' may not be more updated to modern days but it works as a classic murder story. I preferred 'a lamb to the slaughter' because I could believe the plot more. It is more realistic and you can make your own mind up about whether Mrs Maloney deserved to get away with the murder. You don't get a character viewpoint. You know how she committed the murder and can understand why but you don't know weather she will get a way with the murder. The only problem I had with this story was that it was to prefect because she fooled the police and twisted the police into eating the murder weapon. If it were more realistic other police officers wouldn't do this but. 'A Speckled Band' is a classic murder mystery and it still holds up the tension and drama even though it was written nearly 100 years earlier. Both stories are very effective and cleverly written because of their realism and the ingenious way they have been written. ?? ?? ?? ?? ...read more.