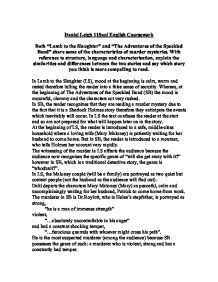 Both &amp;#147;Lamb to the Slaughter&amp;#148; and &amp;#147;The Adventures of the Speckled Band&amp;#148; share some of the characteristics of murder mysteries. With reference to structure, language and characterisation, explain the similarities and differences between

Daniel Leigh 11Saul English Coursework Both "Lamb to the Slaughter" and "The Adventures of the Speckled Band" share some of the characteristics of murder mysteries. With reference to structure, language and characterisation, explain the similarities and differences between the two stories and say which story you think is more compelling to read. In Lamb to the Slaughter (LS), mood at the beginning is calm, warm and rested therefore lulling the reader into a false sense of security. Whereas, at the beginning of The Adventures of the Speckled Band (SB) the mood is mournful, clammy and the characters act very rushed. In SB, the reader recognizes that they are reading a murder mystery due to the fact that it is a Sherlock Holmes story therefore they anticipate the events which inevitably will occur. In LS the text confuses the reader at the start and so are not prepared for what will happen later on in the story. At the beginning of LS, the reader is introduced to a safe, middle-class household where a loving wife (Mary Maloney) is patiently waiting for her husband to come home. But in SB, the reader is introduced to a mourner, who tells Holmes her account very rapidly. The witnessing of the murder in LS affects the audience because the audience now recognises the specific genre of "will she get away with it?" however in SB, which is a traditional detective story, the genre is "whodunit?". ...read more.

And which went smoothly for example: the murder of Helen's sister in SB. Dahl allows the reader into the private thoughts of Mary (murderer of LS) but Doyle does not allow the reader to enter the private thoughts of Dr.Roylott (murderer of SB). Some people possess the opinion that Dahl allows the readers into the private thoughts of the murderer so the audience sympathises with Mary later on in the story. Most of the time, in murder novels, the murderers are usually male, so the very fact that Dahl places a female murderer in the story makes the reader more anxious to read on. If there was a female murderer in SB the audience would be enormously stunned, the women might have started to fight against the s****t attitudes of men in those times as some form of a feminist society and the author would be banned from writing anything else. In SB, Holmes is the detective of who investigates who carried out the murder. He is mysterious, yet thoroughly professional. He examines every single minute clue and trace of evidence there is to offer. In LS, Noonan is the 'detective' who scarcely murders his workmate and personal friend, Patrick Maloney. Noonan is has a straightforward approach towards the murder and jumps to conclusions, "...killed by...a heavy blunt instrument" He jumps to quite a few conclusions including the fact that the murderer was male and that 'he' left straight after carrying out the crime, "the murderer may have taken it with him". ...read more.

This concept generally represents a more traditional style of writing- used in the 19th century. In SB these are the order of events: * Helen tells Holmes about her sister's untimely and mysterious death (the reader is exposed to the murder at the beginning) * Holmes investigates * Holmes solves the 'whodunnit?' mystery. In LS, these are the order of events: * The reader is introduced to a cosy, rested and loving housewife (Mary) who is waiting for her husband to come home from work * Patrick (her husband) tells Mary (his wife) shocking news, probably divorce * Mary falls into shock * Mary kills Patrick (reader is exposed to murder in the middle of the story, or in chronological order) * Noonan investigates murder (poorly) * Mary 'gets away with murder'. In LS, there are a few main points at which the tone changes or Mary's personality changes, for example when she turns from a loving wife into an evil murderer, "So I've killed him." The crucial points in SB is when the audience is introduced to the story of the murder and the mystery of it. Also, the reader is not surprised that the murderer is Helen's step-father, Dr.Roylott and that the motive is one of greed. The story of LS is quite short compared to SB which is at least ten pages long because the language is more formally structured and so drawn out a lot further than LS which is only a few pages long. Daniel Leigh 11Saul English Coursework ...read more.