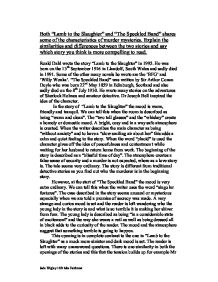 Both &amp;#147;Lamb to the Slaughter&amp;#148; and &amp;#147;The Speckled Band&amp;#148; shares some of the characteristics of murder mysteries. Explain the similarities and differences between the two stories and say which story you think is more compelling to read.

Both "Lamb to the Slaughter" and "The Speckled Band" shares some of the characteristics of murder mysteries. Explain the similarities and differences between the two stories and say which story you think is more compelling to read. Roald Dahl wrote the story "Lamb to the Slaughter" in 1995. He was born on the 13th September 1916 in Llandolf, South Wales and sadly died in 1991. Some of the other many novels he wrote are the 'BFG' and 'w***y Wonka'. "The Speckled Band" was written by Sir Arthur Conan Doyle who was born 22nd May 1859 in Edinburgh, Scotland and also sadly died on the 8th July 1930. He wrote many stories on the adventures of Sherlock Holmes and amateur detective. Dr Joseph Bell inspired the idea of the character. In the story of "Lamb to the Slaughter" the mood is warm, friendly and tranquil. We can tell this when the room is described as being "warm and clean". The "two tall glasses" and the "whiskey" create a homely or domestic mood. A bright, cosy and in a way safe atmosphere is created. When the writer describes the main character as being "without anxiety" and to have a "slow smiling air about her" this adds a calm and quiet feeling to the story. When the word "placid" is used the character gives off the idea of peacefulness and contentment while waiting for her husband to return home from work. The beginning of the story is described as a "blissful time of day". The atmosphere creates a false sense of security and a murder is not expected, where as a love story is. The tale seems very ordinary. The story is different from traditional detective stories as you find out who the murderer is in the beginning story. However, at the start of "The Speckled Band" the mood is very extra ordinary. We can tell this when the writer uses the word "singular features". ...read more.

He is very precise and listens to each detail, "pray be precise to detail". He isn't happy with the vague. His mind works quickly and thoroughly unlike Jack Noonan. He then notices the bruises on Helens wrist and realise it is her stepfather "you are screening your stepfather". He is very calm and quick in his actions. Holmes remains calm even when Roylott is shouting and threatening him, he doesn't react. Holmes just smiles and stays cool even when provoked. He also wastes no time we can tell this when he goes and finds the will as soon as Helen leaves. In contrast Jack Noonan is the exact opposite he is inefficient and sloppy. He doesn't to take his job a seriously as Holmes. When they are sent to investigate the murder he seems very willing to accept her story straight away. He also lets Mrs Maloney remain with them throughout the investigation even though she should have been one of the main suspects. When she tells them her story they do check her alibi but only because it is procedure and they have to not because they want to. He then doesn't delve any deeper and seems to forget about Mary being a suspect, even though it is very important in a case to suspect everyone. Noonan finds it "impossible" that Mary to have committed the murder because of her femininity and the fact that she is a woman. All the way through the investigation the prime suspect Mary is unsuspected and treated kindly. Noonan seems very unprofessional. The writer Ronald Dahl seems to insist on making Noonan and the police force look thick and sloppy. It seems as if Roald Dahl has no respect for the police force. Noonan offers to let Mrs Maloney stay with his wife or her sister, which in a way would let her be able to escape if she wanted to. ...read more.