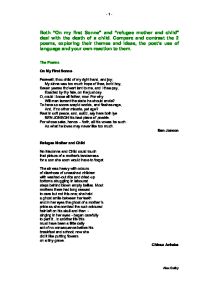 Both "On my first Sonne" and "refugee mother and child" deal with the death of a child. Compare and contrast the 2 poems, exploring their themes and ideas, the poet's use of language and your own reaction to them. The Poems On My First Sonne Farewell, thou child of my right hand, and joy; My sinne was too much hope of thee, lov'd boy, Seven yeeres tho'wert lent to me, and I thee pay, Exacted by thy fate, on the just day. O, could I loose all father, now. For why Will man lament the state he should envie? To have so soone scap'd worlds, and fleshes rage, And, if no other miserie, yet age? ...read more.

Most mothers there had long ceased to care but not this one; she held a ghost smile between her teeth and in her eyes the ghost of a mother's pride as she combed the rust-coloured hair left on his skull and then - singing in her eyes - began carefully to part it...In another life this must have been a little daily act of no consequence before his breakfast and school; now she did it like putting flowers on a tiny grave. Chinua Achebe Background on Ben Jonson Ben Jonson was born on the 11th of June, 1572. He was educated at Westminster School by William Camden and worked his stepfather's trade, bricklaying. ...read more.

A year later Jonson killed a fellow actor. His name was Gabriel Spencer. Jonson killed him in a duel in the Fields at Shoreditch. Background on Chinua Achebe Chinua Achebe was born in eastern Nigeria. He started his education at a church missionary society school. His 'secondary' and university educations were also in Nigeria. He graduated from University College, Ibadan, in 1953. Then, he worked for over ten years for the Nigerian Broadcasting Company. He left the N.B.C. in 1966 and headed for a career in writing and teaching. Achebe played a significant role in the development of the Heinemann African Writers Series, a series which has given many Africans a voice in the western world and which, outside of Africa, publishes more African (and Caribbean) writers than any other publishing house. - 1 - Alex Selby ...read more.