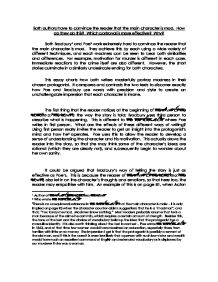 Both authors have to convince the reader that the main character is mad. How do they do this? Which portrayal is more effective? Why? Bradbury and Poe.

Both authors have to convince the reader that the main character is mad. How do they do this? Which portrayal is more effective? Why? Both Bradbury1 and Poe2 work extremely hard to convince the reader that the main character is mad. They achieve this by each using a wide variety of different techniques, and each madness can be seen to bear both similarities and differences. For example, motivation for murder is different in each case. Immediate reactions to the crime itself are also different. However, the short stories culminate in a similarly undesirable ending for both characters. This essay charts how both writers masterfully portray madness in their chosen protagonist. It compares and contrasts the two texts to discover exactly how Poe and Bradbury use words with precision and style to create an unchallengable impression that each character is insane. The first thing that the reader notices at the beginning of The Fruit at the Bottom of the Bowl is the way the story is told; Bradbury uses third person to describe what is happening. This is different to The Tell Tale Heart, where Poe writes in first person. What are the effects of these different ways of writing? Using first person really invites the reader to get an insight into the protagonist's mind and how he3 operates. Poe uses this to allow the reader to develop a sense of understanding the character and his motivation. This actually draws the reader into the story, so that she may think some of the character's ideas are rational (which they are clearly not), and subsequently begin to wonder about her own sanity. It could be argued that Bradbury's way of telling the story is just as effective as Poe's. This is because the reader of The Fruit at the Bottom of the Bowl is also let in on the character's thoughts and emotions, so that here too, the reader may empathise with him. ...read more.

Although each paranoia is slightly different - Poe's protagonist is terrified of a faceless 'danger' while Acton fears that Huxley has 'set him up' for the murder by Huxley by encouraging him to leave his fingerprints all over the house. This paranoia of Acton's is developed by replaying conversations that he had with his victim. It is probable, though not certain, that Acton exaggerates many of the things that Huxley said. For instance; "Feel this binding. Feel of it." Acton emphasises the word 'feel', which Huxley would not have done when he said it. By believing his theory that Huxley had planned his own murder in order to get Acton put into prison (totally implausible) he manages to relieve himself of some of the tremendous feeling of guilt which is bearing down on him. In fact everything that Acton does throughout the story is an attempt to 'undo' what he has done, or at least to try to forget or detach himself from his victim. He is constantly trying to escape - most importantly from his conscience, but also from the police. An interesting idea is when Huxley's drunken friend knocks on the door - "I know you're in there, Huxley! Open up, dammit! This is Billy-Boy, drunk as an owl, drunker than two owls." It may be that what is said has little meaning, and that the words Bradbury used are just typical of what someone might say when they have had too much to drink. However, surely it is a possibility at least that the 'owl' that the drunk likens himself to is a metaphor for what Acton is afraid of? Owls are well known for their silent flight, and perhaps this suggests that Acton is very worried that something - the police or his conscience - will swoop in and catch him out without warning. Is it also an idea that the owl is what he is trying to be - as "quiet" as possible so that he doesn't let anyone know that it was him who killed Huxley? ...read more.

1 Author of The Fruit at the Bottom of the Bowl 2 Who wrote The Tell Tale Heart 3There is no unequivocal evidence in The Tell Tale Heart that the main character is male - it is only implied on page 93 when the character counter-claims suggestions that he is a "madman", and that; "You fancy me mad. Madmen know nothing." Most readers probably assume that he is a man because of the crime he commits, which requires a certain amount of strength. Besides this, the tone of the text and the choice of vocabulary build up the idea that the protagonist has a masculine identity. It is also worth thinking about the text in context - Poe wrote The Tell Tale Heart in 1843, and at that time few women would have received an education, especially those from families with little or no money. The impression I get is that the protagonist is possibly a servant of the old man, and if this is the case it is even less likely that a person with such low status and wealth would have such an excellent command of English and extended vocabulary as is displayed by our murderer if she was a woman. 4 We are not given any real proof that Huxley has been having the affair with Lily (his wife), only that Huxley tells him, "She says she'll go with me to Mexico City" and when Acton asks where Lily is, Huxley replies, Do you think I'd tell you, really?" These are not the words of a man who is trying desperately to protest his innocence, so right from the beginning, the idea that Huxley is not a very decent person has been established in the reader's mind. But it really doesn't matter whether Huxley did have an affair with Lily or not; it is Huxley's personality which Bradbury describes and makes suggestions about in the text which show us why Acton killed him. 5 As The Fruit at the Bottom of the Bowl was in 1963, adapted by Ilona Ference which featured Leonard Rossiter as William Acton ...read more.