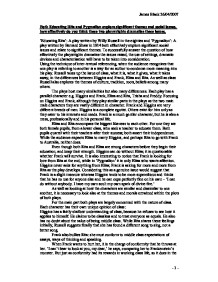 Both Educating Rita and Pygmalion explore significant themes and social issues, how effectively do you think these two playwrights dramatise these issues.

Both Educating Rita and Pygmalion explore significant themes and social issues, how effectively do you think these two playwrights dramatise these issues. 'Educating Rita': A play written by Willy Russell in the eighties and 'Pygmalion': A play written by Bernard Shaw in 1914 both effectively explore significant social issues and relate to significant themes. To successfully answer the question of how effectively the playwrights dramatise the issues raised, the use of settings, dramatic devices and characterisation will have to be taken into consideration. Using the technique of inter-textual referencing, when the audience recognizes that one play is referring to another is a way for an author to condense more meaning into his play. Russell takes up the issue of class, what it is, what it gives, what it takes away, in the differences between Higgins and Frank, Eliza and Rita. As well as class Russell also explores the themes of culture, tradition, roots, beliefs among many others. The plays host many similarities but also many differences. Each play has a parallel character e.g. Higgins and Frank, Eliza and Rita, Trisha and Freddy. ...read more.

Trish is part of a thread of scenes suggesting that literature, the arts, culture, the things of the mind, are not in themselves the answers to anything. In Rita's terms, Trish hasn't found herself. She has no career, but seems to be a glorified waitress. There is no significant other in her life. More dangerously, she is always comparing the life she leads with the literature and art she values, and finding real life harder to imagine. It may not seem palpable but Frank's poetry is a rather strong issue in 'Educating Rita' which contains several interesting ideas :- * Frank tells Rita that he and his wife divorced over his failure to continue writing poetry. This is a symbol of Frank's failure to keep exploring his own self. Worse, his disillusionment with his own accomplishment to spread to the whole of literature and to begin to corrupt his professional life as a teacher. * Frank knows he has lost Rita. Whatever she says about his poems will be wrong. But having given her the education she craves, he is now trying to assert that it is worthless: she can't tell the difference between his poems and real poetry. ...read more.

However, Russell in 1980, when women not only have the vote, but all professions are open to them, and they have feminism to support them, can repeat Shaw's ending but make it more convincing and therefore stronger. When Rita returns to tell Frank he is a good teacher, she accepts the Frankenstein monster charge he has thrown at her. Intelligently, she admits she has taken in all middle class values and ideas too fast and therefore uncritically. She is a parrot. But she will grown through this stage. What Frank has given her is choice, that is control over her own life. We have seen Rita tempted to allow others to control her, like Denny. We have seen her grow beyond Frank's control, choosing not to come to his tutorials, because he cannot offer her anything. Like Higgins she is alone at the end of the film, but her sense of herself is more inclusive than his. She is not a bus, bouncing over people, but a very strong, yet caring individual. Like Eliza she has become a woman, but if Frank had a hand in her making, now she is her own possession and will continue to be her own creator. James Black 26/04/2007 - 1 - ...read more.