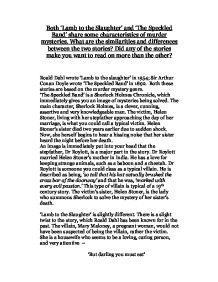 Both 'Lamb to the Slaughter' and 'The Speckled Band' share some characteristics of murder mysteries - What are the similarities and differences between the two stories? Did any of the stories make you want to read on more than the other?

Both 'Lamb to the Slaughter' and 'The Speckled Band' share some characteristics of murder mysteries. What are the similarities and differences between the two stories? Did any of the stories make you want to read on more than the other? Roald Dahl wrote 'Lamb to the slaughter' in 1954; Sir Arthur Conan Doyle wrote 'The Speckled Band' in 1892. Both these stories are based on the murder mystery genre. 'The Speckled Band' is a Sherlock Holmes Chronicle, which immediately gives you an image of mysteries being solved. The main character, Sherlock Holmes, is a clever, cunning, assertive and very knowledgeable man. The victim, Helen Stoner, living with her stepfather approaching the day of her marriage, is what you could call a typical victim. Helen Stoner's sister died two years earlier due to sudden shock. Now, she herself begins to hear a hissing noise that her sister heard the night before her death. An image is immediately put into your head that the stepfather, Dr Roylott, is a major part in the story. Dr Roylott married Helen Stoner's mother in India. He has a love for keeping strange animals, such as a baboon and a cheetah. ...read more.

Wealth plays a major part in the story. The reason that Sherlock Holmes is involved in a murder that took place at Stoke Moran was all due to the fact that Dr Roylott did not wish to pay out a sum of money that Helen Stoners mum had left her. The different styles of writing are also something that should be mentioned. In 'The Speckled Band' the writing has words that are not as common in the present day conversation. E.g.-'singular' (extraordinary). Also, 'Lamb to the Slaughter' seems to use more informal language in the conversations, As if they already know someone who they haven't met. 'The Speckled Band' uses more of a formal style of conversation that, once again, indicates to you that it is was written in the 1900's. 'The Speckled Band' uses many metaphors, alliteration and similes. 'The dense darkness' 'As swift as intuitions' 'Frightened eyes, like those of some hunted animal' The settings are a very important part in the two stories. In the 'Lamb to the Slaughter', the homely, cosy background is a perfect setting to fool the reader in thinking that the story is not a 'typical murder mystery'. ...read more.

No one expects Mary Maloney, the quiet, considerate housewife to kill her husband. So the reader wants to read on to find out if she gets away with it, or if she gets caught. In 'The Speckled Band' the suspense is built up on how Helen Stoner's sister is killed? Was it one of the gypsies camping in the estate? Or was it the baboon or cheetah that managed to kill Miss Stoner? All of these questions make the reader want to get to the bottom of the story. The endings for both stories were very similar. In both stories, the victim and the murderer were very close. In 'The Speckled Band' the murderer was the victim's stepfather. In 'Lamb to the Slaughter' the murderer is the husband of the victim. The Speckled Band ending was slightly expected, as the stepfather was by far the prime suspect at the start of the story. However, in 'Lamb to the Slaughter' the fact that Mary didn't get caught was a surprise. She got rid of the evidence by cooking it and feeding it o the officers investigating the murder of her husband. The story that seemed most successful to me was 'Lamb to the slaughter'. No one expected Mary Maloney to murder her husband and then not get caught. The way Roald Dahl made the story into a mystery when reading the story was unique. ...read more.