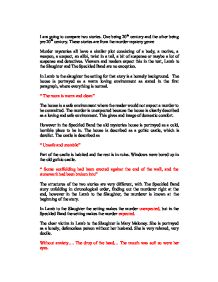 Both Lamb to the Slaughter and the Speckled Band share some characteristics of murder mysteries. What are the similarities and differences between the two stories? Did either of the stories want to make you read on?

I am going to compare two stories. One being 20th century and the other being pre 20th century. These stories are from the murder mystery genre Murder mysteries all have a similar plot consisting of a body, a motive, a weapon, a suspect, an alibi, twist in a tail, a bit of suspense or maybe a lot of suspense and detectives. Viewers and readers expect this in the text, Lamb to the Slaughter and The Speckled Band are no exception. In Lamb to the slaughter the setting for that story is a homely background. The house is portrayed as a warm loving environment as stated in the first paragraph, where everything is normal. " The room is warm and clean" The house is a safe environment where the reader would not expect a murder to be committed. The murder is unexpected because the house is clearly described as a loving and safe environment. This gives and image of domestic comfort. However in the Speckled Band the old mysteries house is portrayed as a cold, horrible place to be in. ...read more.

When her husband tells her he is leaving her that's when the tension builds up and anger inside of her. She does not want to be left on her own, in her state. That's then without thinking she hits her husband on the back of the head with a leg of lamb. Most murder mysteries have the typical victims, murderers, and detectives. The Speckled Band has a typical detective, the famous detective being Sherlock Holmes with his deer stalker hat and pipe always deep in thought about the investigation "his arms folded, his hat pulled down over his eyes, and his chin sunk upon his breast, buried in the deepest thought". But in the Lamb to the Slaughter the detectives are so foolish, a complete contrast to Sherlock Holmes. Sherlock Holmes comes across as a typical fictional detective. In addition Miss Stoner, in The Speckled Band is a typical victim, vulnerable, anxious, weak and scared. She say's " It is not cold which makes me shiver" She was worried for her life. ...read more.

Helen! It was the band! The Speckled band!" In the Lamb to the Slaughter the point of high tension is whether the detectives would find out that it was Mary Maloney, who killed her husband, "Probably right under our very noses. What do you think, Jack?' This was almost a sick comical twist to the ending. When she laughs didn't seem to be funny but more sinister and evil. In the other room, Mary Maloney began to giggle". The irony of it all is that the police who were puzzled why they could not find the murder weapon, they did not know they were consuming it. The Speckled Band had much more twists and turns in it, and you weren't sure what was going to come next. From my perspective I think that the Sir Arthur Conan Doyle story, The Speckled Band is the most successful out of the two, as the author made the main character, Sherlock Holmes is such an intriguing and interesting character, which draws the audience in. He leaves the reader in suspense until the end of the story until the murderer is revealed ...read more.