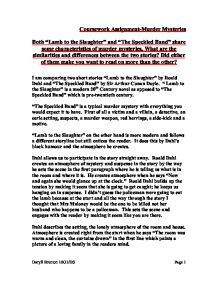 Both &quot;Lamb to the Slaughter&quot; and &quot;The Speckled Band&quot; share some characteristics of murder mysteries. What are the similarities and differences between the two stories? Did either of them make you want to read on more than the other?

Coursework Assignment-Murder Mysteries Both "Lamb to the Slaughter" and "The Speckled Band" share some characteristics of murder mysteries. What are the similarities and differences between the two stories? Did either of them make you want to read on more than the other? I am comparing two short stories "Lamb to the Slaughter" by Roald Dahl and "The Speckled Band" by Sir Arthur Conan Doyle. " Lamb to the Slaughter" is a modern 20th Century novel as apposed to "The Speckled Band" which is pre-twentieth century. "The Speckled Band" is a typical murder mystery with everything you would expect it to have. First of all a victim and a villain, a detective, an eerie setting, suspects, a murder weapon, red herrings, a side-kick and a motive. "Lamb to the Slaughter" on the other hand is more modern and follows a different storyline but still entices the reader. It does this by Dahl's black humour and the atmosphere he creates. Dahl allows us to participate in the story straight away. Roald Dahl creates an atmosphere of mystery and suspense in the story by the way he sets the scene in the first paragraph where he is telling us what is in the room and where it is. He creates atmosphere when he says "Now and again she would glance up at the clock." Roald Dahl builds up the tension by making it seem that she is going to get caught; he keeps us hanging on in suspense. I didn't guess the policeman were going to eat the lamb because at the start and all the way through the story I thought that Mrs Maloney would be the one to be killed not her husband who happens to be a policeman. This sets the scene and engages with the reader by making it seem like you are there. Dahl describes the setting, the lonely atmosphere of the room and house. ...read more.

"Hullo Sam", she rehearsed this several times until the voice and the smile were coming out better. She went down stairs and out of the back door and into the street to Sam the Grocer's. "Hullo Sam" she said brightly and while getting her potatoes, peas and cheesecake Mrs Maloney deliberately makes the point of saying to Sam that her husband is "tired and doesn't want to eat out tonight". Mrs Maloney is very clever and almost believes her story herself. When she returns home and sees her husband on the floor she puts on a dramatic scene to convince herself its real. Her love for Patrick quickly changes to the unborn. She then rings the police and two of Patrick's friends from the force arrive. They go through the motions and none of them believe that Mrs Maloney murdered her dear husband. They then check the alibi and talk about what the murder weapon could be, the police asked her if they had anything missing from the house like a very big spanner or a heavy metal vase. Mrs Maloney replied "They didn't have any heavy metal vases", or a big spanner". Mrs Maloney then has a drop of whiskey and asked the police if they would eat the meat for her so it wouldn't be wasted. The police were happy to accept and the murder weapon would never be found. At the end the police are talking about "it must have been a h**l of a big club the guy must've used to hit poor Patrick". The doctor said that Mr Maloney's skull was smashed to pieces like from a sledge hammer. Then one of them says personally they think its right there on the premises "probably right under their noses". Mrs Maloney is in the other room and she begins to giggle to herself. It could be because she thinks she's won and got away with it or it could be that she's going mad. ...read more.

Something else that intrigues the reader is the fact that the bed was "clamped to the floor" which is very strange and means the bed is in the same position to the ventilator and the bell rope at all times. We worry for Miss Stoner as Holmes investigates as a matter of urgency and we expect her death is imminent. The setting of the house at Stoke Moran is typical of a murder mystery as opposed to the homely atmosphere of Dahl's story. Dahl's reader is unsuspecting of what is to happen due to his deep description but you don't feel this way reading "The Speckled Band". It's hard to believe that Dr Roylott wasn't at home when Holmes carried out his search. You would have thought that after following his stepdaughter to Holmes' office that he would check up on her at home, it pushes coincidence too far "The Speckled Band" is crafted with precision and absolute detail and like a "fly on the wall documentary". "The Speckled Band" is long and drawn out but very entertaining, funny and brilliantly researched. It is very cleverly written with everything explained at the end of the story using Watson. I didn't find it credible to believe he could keep a snake in a safe and for it to live off milk and that the snake could have been charmed. Nobody knew that he had had the snake sent to him which is a bit far fetched. The stories are of two very different murders; personally I prefer "Lambs to the Slaughter". It is unpremeditated; a spur of the moment and the wife didn't get caught. "The Speckled Band" is planned and the Dr got caught. In "The Speckled Band" everything is explained at the end but in "Lamb to the Slaughter" we don't know what happened to Mrs Maloney. We are left to speculate and this is a more satisfactory ending I believe. It leaves the reader thinking of what will eventually happen to Mrs Maloney and whether she does get caught or her scheme isn't found out. Daryll Brenton 10G1/DS Page 1 ...read more.