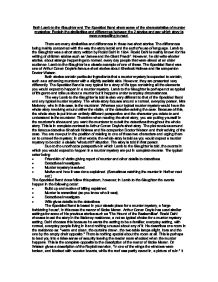 Both Lamb to the Slaughter and The Speckled Band share some of the characteristics of murder mysteries: Explain the similarities and differences between the 2 stories and say which story is more compelling to read.

Both Lamb to the Slaughter and The Speckled Band share some of the characteristics of murder mysteries: Explain the similarities and differences between the 2 stories and say which story is more compelling to read. There are many similarities and differences in these two short stories. The differences being mainly concerned with the way the story is told and the author's use of language. Lamb to the Slaughter was a short story written by Roald Dahl in 1954. Roald Dahl is mainly known for his writing of children stories such as 'James and the Giant Peach'. However, he did write shorter stories, about strange happenings to normal, every day people that were aimed at an older audience. Lamb to the Slaughter is a classic example of one of these. The Speckled Band was one of Arthur Conan Doyle's famous short stories about Sherlock Holmes and his companion Doctor Watson. Both stories contain particular ingredients that a murder mystery is expected to contain, such as a scheming murderer with a slightly s******c side. However, they are presented very differently. The Speckled Band is very typical for a story of it's type containing all the elements you would expect to happen in a murder mystery. Lamb to the Slaughter is perhaps not so typical of it's genre and tells us about a murder but it happens under everyday circumstances. ...read more.

Dahl chooses this because he wants the setting to be a familiar, everyday setting, with normal, everyday people living in it and nothing unusual about any of it. He describes one room in the residence as: "warm and clean, the curtains drawn, the two table lamps alight, hers and the one by the empty chair opposite." There is nothing special about the room at all. This is perhaps to lead you into a false sense of security leaving the reader more shocked when the murder happens. This is the complete opposite to the description of the manor of Stoke Moran. Dr Watson gives a description of the Roylott mansion, "In one of the wings the windows were broken, and blocked with wooden boards, while the roof was partly caved in, a picture of ruin." It gives the reader an image of an eerie, old, manor house where something bad is begging to happen. I am now going to consider the contrast in the characters. In the Speckled Band, Dr Roylott is basically made out to be the murderer from the very beginning due to Watson's and Helen Stoner's descriptions of him, and his meeting with Holmes. Helen Stoner told Holmes, that Dr Roylott had "violence of temper approaching mania," which resulted in long-term imprisonment in India because "in a fit of anger caused by some robberies which had been perpetuated in the house, he beat his native butler to death." ...read more.

Fresh ice cubes in the Thermos Bucket. Not only is the language simple, but there is nothing special at all about the room. Whereas the Speckled Band has really dramatic descriptions with everything exaggerated and explained in huge detail. This style crosses over to the kind of language the characters are using. In the Speckled Band, Sherlock's first words are: "Very sorry to knock you up, Watson, but it's the common lot this morning. Mrs Hudson has been knocked up, she retorted upon me, and I on you." This is very strange and abnormal compared to the language the characters are using in Lamb to the Slaughter: "Hullo, darling." she said. "Hullo." He answered. You really cannot get anymore simple than that. I think the twist in Lamb to the Slaughter was because people it makes a change from the typical outcome the audience is expecting. I am going to conclude that they both have many qualities of a murder mystery, it is simply the properties of a murder mystery that have changed over the 30-40 years or so in between that have made the stories so different. I can back this up with the way I think Lamb to the Slaughter is a more compelling read, due to it's twists throughout the story and the way it is easy to relate to because it is so normal. However, the twists mean you can never tell what is to happen next and because of that I think it will do a better job at attracting a modern day audience. By Sam Lees ...read more.