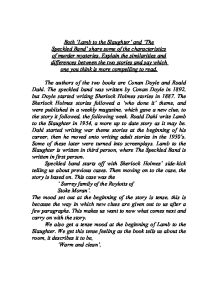 Both 'Lamb to the Slaughter' and 'The Speckled Band' share some of the characteristics of murder mysteries. Explain the similarities and differences between the two stories and say which one you think is more compelling to read.

Both 'Lamb to the Slaughter' and 'The Speckled Band' share some of the characteristics of murder mysteries. Explain the similarities and differences between the two stories and say which one you think is more compelling to read. The authors of the two books are Conan Doyle and Roald Dahl. The speckled band was written by Conan Doyle in 1892, but Doyle started writing Sherlock Holmes stories in 1887. The Sherlock Holmes stories followed a 'who done it' theme, and were published in a weekly magazine, which gave a new clue, to the story it followed, the following week. Roald Dahl write Lamb to the Slaughter in 1954, a more up to date story as it may be. Dahl started writing war theme stories at the beginning of his career, then he moved onto writing adult stories in the 1950's. Some of these later were turned into screenplays. Lamb to the Slaughter is written in third person, where The Speckled Band is written in first person. Speckled band starts off with Sherlock Holmes' side-kick telling us about previous cases. Then moving on to the case, the story is based on. This case was the ' Surrey family of the Roylotts of Stoke Moran'. The mood set out at the beginning of the story is tense, this is because the way in which new clues are given out to us after a few paragraphs. This makes us want to now what comes next and carry on with the story. We also get a tense mood at the beginning of Lamb to the Slaughter. We get this tense feeling as the book tells us about the room, it describes it to be, 'Warm and clean', the paragraph also makes out a dark room which adds tension. The way in which Mary Maloney waits for her husband to come back from work, makes me think that she is up to something and to expect something to come. ...read more.

On the sideboard behind her, two tall glasses, soda water, whisky. Fresh ice cubes in the Thermos bucket.' This setting brings out a tense feeling as she is waiting for something. This makes us tense and want to know what is about to happen. In the Speckled Band the Dr. house is described, ' The building was of grey, lichen-blotched stone, with a high central portion, and two curving wings, like the claws of a crab, thrown out on each side. In one of these wings the windows were broken, and blocked with wooden boards, while the roof was partly caved in, a picture of ruin. The central portion was in little better repair, but the right-hand block was comparatively modern, and the blinds in the windows, with the blue smoke curling up from the chimneys, showed that this was where the family resided. Some scaffolding had been erected against the end wall, and the stonework had been broken into, but there were no signs of any workmen at the moment of our visit.' The atmosphere is that the house could be haunted and dangerous. As the scaffolding and broken windows bring out a danger. This tells us straight away that something could happen at any moment. The two stories are put together as murder stories, one is what used come out in magazines, and came out with a new clue every week. The other however is a short story and the police do not have any clues to the murder at all. The Sherlock Holmes story is a classic 'whodunit' story because at first he does not know might have committed the murder. Also it is a classic sort of way the detective searches for the clues and then he/she, find the murderer. The key points in the Speckled Band is when Sherlock finds a new clue, because then we can be detectives ourselves and we can think who it may be for our selves. ...read more.

Nowadays murder and crimes are thought about in more detail. They are investigated with no means of thinking of family, but there are still some cases were the wrong person goes in jail. I think that Speckled Band is more appealing. This is because I think more people would want to know how detectives used to work. I enjoyed this piece as I like the Sherlock Holmes mysteries. Lamb to the Slaughter is a story that many people would not like, as it does not have a good story to it. I enjoyed solving the mystery myself as well with Sherlock in the Conan Doyle story. But I also found Dahl's story enjoyable because of the humor in it. Dahl makes his story a funny story as Mary outwits the police in the murder. Speckled Band is more compelling as it has a proper mystery behind it. We do not know who may have murdered Helen Stoner's sister, so we have to work with Sherlock to find out. We enjoy this story as there are pieces of the puzzle given to us to work out for our selves. Lamb to the Slaughter however is a plain story, it does not have any clues to a murder and the police do not do their jobs properly. The two stories are only similar in the fact they are murder stories. It all changes after that because one is written to tell us about a previous case two detectives have previously investigated. The other is a story where we follow the activities of the actual murder criminal. In the Sherlock Holmes story we are given clues to the murder, and in Mary's story we are introduced to the murder straight away. Murder stories have changed a great deal since Victorian times, some are following the murderer while others are in the eyes of the police. Still Sherlock Holmes is the best murder stories as they give the reader clues to figure out for themselves. ...read more.