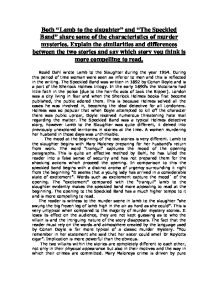 Both &quot;Lamb to the slaughter&quot; and &quot;The Speckled Band&quot; share some of the characteristics of murder mysteries. Explain the similarities and differences between the two stories and say which story you think is more compelling to read.

Both "Lamb to the slaughter" and "The Speckled Band" share some of the characteristics of murder mysteries. Explain the similarities and differences between the two stories and say which story you think is more compelling to read. Roald Dahl wrote Lamb to the Slaughter during the year 1954. During this period of time woman were seen as inferior to men and this is reflected in the writing. The Speckled Band was written in 1892 by Conan Doyle and is a part of the Sherlock Holmes trilogy. In the early 1890's the Victorians had little faith in the police (due to the horrific acts of Jack the Ripper). London was a city living in fear and when the Sherlock Holmes books first become published, the public adored them. This is because Holmes solved all the cases he was involved in, becoming the ideal detective for all Londoners. Holmes was so popular that when Doyle attempted to kill off the character there was public uproar, Doyle received numerous threatening hate mail regarding the matter. The Speckled Band was a typical Holmes detective story, however Lamb to the Slaughter was quite different, it delved into previously unexplored territories in stories at the time. A women murdering her husband in those days was unthinkable. The mood at the beginning of the two stories is very different. Lamb to the slaughter begins with Mary Maloney preparing for her husband's return from work. The word "tranquil" captures the mood of the opening paragraphs. This is quite an effective method by Dahl, he has lulled the reader into a false sense of security and has not prepared them for the shocking actions which proceed the opening. In comparison to this the speckled band begins with a distinct aroma of urgency surrounding it right from the beginning "It seems that a young lady has arrived in a considerable state of excitement". ...read more.

The speckled band is roughly double the length of the lamb to the slaughter, this is significant as the extra length gives the author an opportunity to plant subtle clues within the text and add seemingly irrelevant details which help to build up the atmosphere of the murder mystery. In Lamb to the slaughter the reader witnesses the crime, therefore it is impossible to plant clues regarding the case, when there is nothing to solve, this is why lamb to the slaughter is shorter than the speckled band. The lamb to the slaughter is narrated in the third person and follows the actions and thoughts of Mary Maloney; in this case the narrator sees all on knows all. Holmes close companion Watson narrates the speckled band, evidently Watson does not know everything otherwise the case would be solved in a matter of minutes. Dahls narrator follows the reactions and movements of Mary Maloney, this reveals the inner thoughts of Mary Maloney and crucially discloses to the reader her initial reactions regarding the murder. Her reactions are vital when deciding weather or not she is regretting the murder of her husband. Directly after she murders her husband she begins to rehearse her alibi by practising what she is going to say upon meeting Sam the grocer "I want some potatoes please, Sam. Yes, and I think a can of peas". By tracking her thoughts throughout the story it becomes apparent to the reader what her intentions are and the reader's attitude towards Miss Maloney begin to change. The narration throughout the speckled band is very dissimilar to the narration of lamb to the slaughter. The narrator actually changes during the story. It begins with Watson giving some background information to the morning before Holmes and himself are given the task of investigating the murder, it then switches back to Helen who gives her statement. "My sister Julia and I were twins". ...read more.

Mary's giggling could also be interpreted as a sign of madness which could have been brought on by the consequences of her actions, this therefore suggests that the matter regarding her husbands death will lie embedded in her conscience for as long as she lives. The difference between the two reactions show that attitudes towards murder and crime had changed dramatically during the period between the Victorian era and the 1950's. In my personal opinion I was more attracted to Conan Doyle story, the speckled band. I particularly enjoyed the writing style throughout the story and the way in which I could attempt to solve the crime appealed to me greatly. I believe that the reader being witness to the murder in lamb the slaughter slightly lost the effect on the reader, however if I had the same beliefs and attitudes towards women as they did in the 1950's, the story would most likely have appealed to me a lot more. I did however enjoy the way in which the cunning instincts of Mary Maloney aided her in manipulating the detectives. The specked ban was the more compelling of the two as the author succeeded in creating tension and the use of red herrings was especially effective as it threw the majority of readers off the scent of the case, and made the outcome even more surprising than previously anticipated. The essential differences between the two essays come in the form of arguably the two most important people involved in it. The detectives and the villains. The motives and attitudes of the two villains are completely different. Similarly the way in which the detectives go about investigating their respective crimes is completely different. The endings to the stories are both unexpected and surprising. The main difference is that in the lamb to the slaughter the reader witnesses the murder, in the speckled band the reader is given he task of solving the murder. This is perhaps the key difference between the two stories. ...read more.