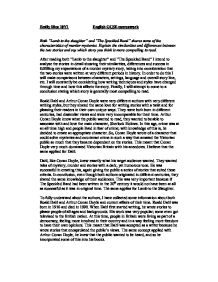 Both &quot;Lamb to the slaughter&quot; and &quot;The Speckled Band&quot; shares some of the characteristics of murder mysteries. Explain the similarities and differences between the two stories and say which story you think is more compelling to read.

Emily Rice 10Y1 English GCSE coursework Both "Lamb to the slaughter" and "The Speckled Band" shares some of the characteristics of murder mysteries. Explain the similarities and differences between the two stories and say which story you think is more compelling to read. After reading both "Lamb to the slaughter" and "The Speckled Band" I intend to analyse the stories in detail showing their similarities, differences and success in fulfilling my expectations of a murder mystery story, taking into consideration that the two stories were written at very different periods in history. In order to do this I will make comparisons between characters, settings, language and overall story line, etc. I will constantly be considering how writing techniques and styles have changed through time and how this affects the story. Finally, I will attempt to come to a conclusion stating which story is generally most compelling to read. Roald Dahl and Arthur Conan Doyle were very different authors with very different writing styles, but they shared the same love for writing stories with a twist and for pleasing their readers in their own unique ways. They were both born in different centuries, had dissimilar views and were very incomparable for their time. Arthur Conan Doyle knew what the public wanted to read, they wanted to be able to associate with and love the main character, Sherlock Holmes. In this age, crime was at an all time high and people lived in fear of crime; with knowledge of this is, he decided to create an appropriate character. ...read more.

Jack Noonan, the detective in Lamb to the Slaughter is shown to contrast Holmes in all ways possible. Both detectives were devised to create a bad opinion of police, Holmes by outsmarting them and Noonan by being so inert, negligent and na�ve. Holmes is shown to be strong mentally and physically and very diligent. He seems to think almost superhumanly into the case. Whereas, Noonan is the opposite; actually eating the evidence and the murderer 'giggling to herself' in the next room shows a lot about him in comparison to Holmes. Conan Doyle chose to show Holmes like this to try and create trust between the reader and the character. He did this because the public at this time in history were supported by a very weak and untrustworthy police force. Holmes was created to outsmart the police force and give the public some assurance. Dahl made Noonan to support the concept that police can't solve a murder and only think about the plain facts and not deeper into the situation. This idea of police stupidity lets the story turn out to be a perfect murder. Holmes dominates The Speckled Band as he was created to be the protagonist in all Sherlock Holmes stories. He is created as a person to have faith in and to outsmart the legal system. This is very different to Noonan's small role in Lamb to the Slaughter as he is only there to support the idea that a simple false assumption could lead to the escape of a guilty person. It is clear that Lamb to the Slaughter is set is 1950's America because of the language used such as 'larder', 'basement' and 'precinct'. ...read more.

This shows that attitudes towards murder have changed, people are now looking for ideas of perfect murder that will go undetected, not just to carry out the murder and face the consequences. People are willing to go further to cover up their actions. Personally, I think that Lamb to the Slaughter was the most appealing and compelling story. I found it easier to read and the style of writing was very easy to follow and let me associate with Mrs Maloney. I enjoyed solving Conan Doyle's mystery but I found that the story was quite predictable. Lamb to the Slaughter had more twists and broke the mould of a stereotypical murder mystery. Roles seemed to have reversed; the female had switched from being the victim to the murderer. I found this interesting. There were very clear difference in the two stories such as the time that they were written, the style of language and general story line. But, after looking more deeply into the plot I have found out that there are a lot of similarities between the stories. Even though writing styles have changed over time, the fact that authors need to know about their readers is a very important part of writing a story. After all, if the audience don't like reading a certain story, it is likely that the rest of the nation won't as nationalities usually share beliefs and opinions. If a story or book contradicts the opinions of people at the time they were written, the story will most likely be unsuccessful. In conclusion, the most important factor about these two stories is that they were suitable for the time they were written. ...read more.