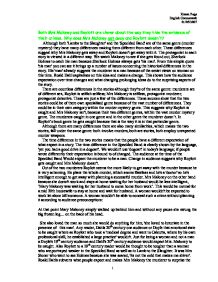 Both Mrs Maloney and Roylott are clever about the way they hide the evidence of their crimes. Why does Mrs Maloney get away and Roylott doesn't? Although both 'Lambs to the Slaughter' and the 'Speckled Band' are of the same genre (murder mystery) they have many differences making them different from each other. These differences suggest why Mrs Maloney gets away and Roylott doesn't get away with it. The protagonist in each story is viewed in a different way. We watch Maloney to see if she gets found out, Sherlock Holmes to catch his man because Sherlock Holmes always gets 'his man'. From this simple quote 'his man' you can see it brings up a number of issues concerning the historical differences in the story. His 'man' already suggests the murderer is a man because of the s****t views on woman on this time. Roald Dahl capitalises on this idea and makes a change. This shows how the audience expectation over time changes and what changing prolonging ideas do to the surprising aspects of the story. There are countless differences in the stories although they're of the same genre: murderers are of different s*x, Roylott is selfish selfless; Mrs Maloney is selfless, protagonist murderer; protagonist detective. These are just a few of the differences. These sources show that the two stories could be of there own specialised genre because of the vast number of differences. They could be in their own category within the murder mystery genre. This suggests why Roylott is caught and Mrs Maloney isn't, because their two different genres, within the vast murder mystery genre. The murderers caught in one genre and in the other genre the murderer doesn't. In Roylott's book genre he gets caught because that is the way it is in that particular genre. Although there are many differences there are also many similarities, which makes the two stories, fall under the same genre: both involve murders, both are stories, both employ unexpected murder weapons. ...read more.

She is also left with a baby to bring up without a dad and without the money he would supply. Does Mrs Maloney get away with it? Clearly to any reader, she doesn't. So does it mean both Roylott and Mrs Maloney were caught but just in different ways. The earlier quotes link in with the motive, Roylott's is selfish; Mrs Maloney's is selfless. Mary Maloney killed her husband because he was having an affair or something along the lines. Dahl leaves the reader to play at detective; he leaves some unsolved clues, which Doyle does not allow the freedom of because Sherlock Holmes cannot miss a thing: And he told her; it didn't take long, four or five minutes at the most, and sh sat very sill through it all, with a kind of dazed horror. She is so in love with he husband she ignores him: It occurred to her he hadn't even spoken... After this she realises her world is falling apart and she cracks, hence the killing. The motive, which is so cleverly hidden by Roald Dahl, is not so apparent but we have a fair idea what it is by her reaction. Any reader would be just as emotionally jacked up to killing someone; anyone would, considering her state of affairs. On the other Roylott's selfish killing for money more than underlines his greedy personality. His motive is clear and we can see why he may want to kill his stepdaughters when Mrs Stoner tells his story. We find out that in the event of marriage Roylott: would have to 'pay a certain annual sum... in the event of our (Mrs Stoner and her sisters) marriage'. Mrs Stoner's twin sisters suspiciously die the night before her wedding. This shows Roylott's clear motive to kill his two stepdaughters before the night of their wedding. Mrs Stoner's twin sister was killed the night before her wedding and a few weeks before this heard a strange whistle. ...read more.

Clearly to any reader whether it a 19th century Doyle reader or a modern one you can clearly see she has manipulated them. Her behaviour before her husband's death and after is totally contrasting. From the lovely housewife she turns into a crafty killer. This shows she's more than just a housewife, like all women are but she is portrayed leading us to think differently. Unlike Mary Maloney Roylott fails to manipulate the detectives but even worse approaches them with threats. Roylott's more complex way of disguising the crime, which he thinks will hide it, is secondary to how the characters are portrayed. If you know someone did the crime it's just a matter of finding evidence but if you are led to believe it's definitely not them you don't even try to catch him or her, this is Roylott's fault. Roylott try's to conceal his crime by training a snake to go up a ventilator, 'the rope was there as a bridge for something to pass through.' Roylott was put in the story to be caught by the ever-successful Holmes; if Roylott weren't caught the story would be unsuccessful. The story is a jigsaw puzzle, which to us seems impossible but all the while Doyle knows Holmes will uncover it making him look intelligent and clever. Irrespective of time Holmes will always get his man. Any reader realises this as soon as Holmes's name is mentioned. If Sherlock Holmes were investigating Mrs Maloney It is questionable whether she would get away with it. Note 'man' underlines that men are the prime suspects and this is true to any audience irrespective of time. So why does Roylott get caught and Mrs Maloney doesn't? There are many aspects to say why and why not. Mrs Maloney is the protagonist in one leading her to come out on top. This is one important factor into who gets caught. They should be separated into different genres because they are so different (many differences) but it is due mainly to the author's to outcome of the story. Kieran Page English Coursework 01/05/2007 1 ...read more.