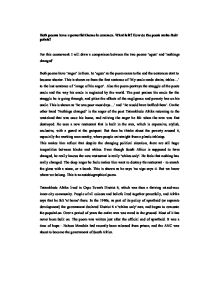 Both poems have a powerful theme in common. What is it? How do the poets make their points?

Both poems have a powerful theme in common. What is it? How do the poets make their points? For this coursework I will draw a comparison between the two poems 'ogun' and 'nothings changed' Both poems have 'anger' in them. In 'ogun' as the poem nears to the end the sentences start to become shorter. This is shown as from the first sentence of 'My uncle made chairs, tables...' to the last sentence of 'image of his anger'. Also the poem portrays the struggle of the poets uncle and the way his uncle is neglected by the world. The poet praises his uncle for the struggle he is going through, and pities the effects of the negligence and poverty has on his uncle. This is shown as 'he was poor most days...' and ' he would have baffled them'. On the other hand 'Nothings changed' is the anger of the poet Tatamkhulu Afrika returning to the wasteland that was once his home, and reliving the anger he felt when the area was first destroyed. ...read more.

Most of it has never been built on. The poem was written just after the official end of apartheid. It was a time of hope - Nelson Mandela had recently been released from prison, and the ANC was about to become the government of South Africa. The uncle of the poet in ogun is from a poor area in the Caribbean. This means that no one would then have enough money to buy the products the uncle makes. The uncle puts his blood and sweat into the objects he carves out. These poems can be linked as protest poems, poems that raise and to a degree complain about issues related to their cultural origins, but which could be universalised. The language and imagery used in Nothings changed is similes. This is shown as 'flaring like a flag'. The poem is also written in the present tense, although it seems he is reliving the experience as he writes the poem. The first stanza puts the reader in the poets' shoes. This is shown as 'under my heels'. This makes us feel as though we are with the poet across the rough ground. ...read more.

The poet in 'ogun' also uses natural features for example 'forests' and 'roots'. Throughout the poem the poet refers to the five senses of our bodies, which are sight, sound, touch, smell and taste. But in comparison to 'nothings changed' the poem is set out in six stanzas. This kind of regularity throughout the lay out of the poem creates a sense of control, and the poet is very clear about his feelings towards district six. But also within the poem, the length of the sentences varies from a whole stanza to just two words. This is shown as the first stanza consists of a single sentence in which each word is stressed, for example 'amiable weeds'. Also there are two short sentences in lines 9 and 48. These short sharp sentences produce anger that builds up. The other similarities in the poems are that they do not rhyme. In 'ogun' Braithwaite uses sensual imagery, enjambment, and alliteration to create the sights and sounds of the workshop. For example 'squeaking'. I think that personally the two poems are quite similar in the way the are protesting, but the poets make their views in different ways. ...read more.