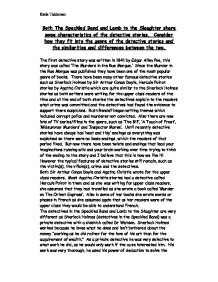 Both The Speckled Band and Lamb to the Slaughter share some characteristics of the detective stories. Consider how they fit into the genre of the detective stories and the similarities and differences between the two. The first detective story was written in 1841 by Edgar Allen Poe, this story was called 'The Murders in the Rue Morgue.' Since the Murder in the Rue Morgue was published they have been one of the most popular genre of books. There have been many other famous detective stories such as Sherlock Holmes by Sir Arthur Conan Doyle, Hercule Poirot stories by Agatha Christie which are quite similar to the Sherlock Holmes stories as both writers were writing for the upper class readers of the time and at the end of both stories the detectives explain to the readers what crime was committed and the detectives had found the evidence to support there suspicions. Ruth Rendell began writing themes which included corrupt police and murderer not convicted. Also there are now lots of TV series/films in the genre, such as 'The Bill', 'A Touch of Frost', 'Midsummer Murders' and 'Inspector Morse'. Until recently detective stories have always had 'neat and tidy' endings as everything was explained so there were no loose endings, which the readers of that period liked. But now there have been twists and endings that lead your imaginations running wild and your brain working over time trying to think of the ending to the story and I believe that this is how we like it! However the typical features of detective stories still remain, such as the victim(s), the villain(s), crime and the detectives. Both Sir Arthur Conan Doyle and Agatha Christie wrote for the upper class readers. Most Agatha Christie stories had a detective called Hercule Poirot in them and as she was writing for upper class readers, she assumed that they had travelled as she wrote a book called 'Murder on The Orient Express'. ...read more.

The false clue was Mrs Maloney's alibi. The detectives didn't find the other clues, which were the leg of lamb and the timing of her alibi. In the Speckled Band the clues seemed very simple to Sherlock Holmes, but they weren't. They were quite a lot of clues but they weren't obvious ones. The clues in The Speckled Band were the bell pull, ventilator, iron safe, saucer of milk, the seat, dog lash, the speckled band and the bed clamped to the floor. All the clues were found but when Sherlock Holmes did find the clues he did not reveal how and why the clues were important to the crime, but at the end of the story he then revealed how and why they were and there were no false clues. Victims and villains in both stories are very different as in The Speckled Band the villain, Dr Roylott, wad very mean and had already got a criminal record for being violent "A series of disgraceful brawls took place, two of which ended in the police court, until at last he became the terror of the village, and the folks would fly at his approach, for he is a man of immense strength, and absolutely uncontrollable in his anger." His relationship with other people was very isolated and if he did make friends with other people they were people of the lower class such as gipsies and the gipsies were only friends with Dr Roylott because he let them camp on his land. Dr Roylott's physical appearance was very domineering. "He was so tall was he that his hat actually brushed the cross-bar of the doorway, and his breath seemed to span it across from side to side." He had a large face, which was scared with a thousand wrinkles, burned yellow with the sun, and marked with every evil passion. The author wants the reader to feel that Dr Roylott is the villain of the story and be prepared for the crimes committed as Julia has already been killed and it seems like Helen is the next victim. ...read more.

The story is organised well for a long story as right up until the end it keeps the readers guessing and asking questions. When The Speckled Band was written the readers of that period liked things to be explained to them, they also liked the victim to get justice by the villain being caught. The language in Lamb to the Slaughter is modern. The sentences are short "Hullo, darling" and there are no complex words. The people that read this story didn't have to have been travelling and they didn't have to be of a particular social class. The sentences are also very simple " Mary Maloney was waiting for her husband to come home from work." The language in The Speckled Band is old fashioned and complicated and the sentences are long "in glancing over my notes of the seventy odd cases in which I have during the last eight years studied the methods of my friend Sherlock Holmes, I find many tragic, some comic, a large number merely strange, but none commonplace; for, working as he did rather for the love of his art than for the acquirement of wealth, he refused to associate himself with any investigation which did not tend towards the unusual, and even the fantastic." The intended readers for this story were the educated people as they address each other by surname but to a woman Sherlock Holmes would call her miss or madam. This was very appropriate for the readers of this time. Out of both the stories I preferred Lamb to the Slaughter. I think this is because there was more action, it had an irony "probably right under our very noses" and it was shorter that The Speckled Band, which I thought, made it more effective. I felt that The Speckled Band story dragged on a bit, even though it had a lot of suspense. Both stories would appeal to very different readers as The Speckled Band would probably appeal to adults and Lamb to the Slaughter would probably appeal to readers today who like varied endings with a twist. Katie Tiddeman ...read more.