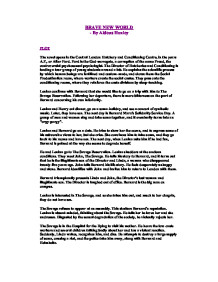 BRAVE NEW WORLD - By Aldous Huxley PLOT The novel opens in the Central London Hatchery and Conditioning Centre, in the years A.F., or After Ford. Ford is the God-surrogate, a corruption of the name Freud, the controversial psychosexual psychologist. The Director of Hatcheries and Conditioning is leading a tour group of young students around a lab. He explains the scientific process by which human beings are fertilized and custom-made, and shows them the Social Predestination room, where workers create the social castes. They pass onto the conditioning rooms, where they reinforce the caste divisions by sleep-teaching. Lenina confirms with Bernard that she would like to go on a trip with him to The Savage Reservation. Following her departure, there is more bitterness on the part of Bernard concerning his own inferiority. ...read more.

John tells Bernard his life story. He feels desperately unhappy and alone. Bernard identifies with John and invites him to return to London with them. Bernard triumphantly presents Linda and John, the Director's lost woman and illegitimate son. The Director is laughed out of office. Bernard is the big man on campus. Lenina is interested in The Savage, and so she takes him out, and much to her chagrin, they do not have sex. The Savage refuses to appear at an assembly. This shatters Bernard's reputation. Lenina is absent-minded, thinking about the Savage. He tells her he loves her and she undresses. Disgusted by the sexual degradation of the society, he violently rejects her. The Savage is in the Hospital for the Dying to visit his mother. He hears the low-caste workers and several children talking badly about her and has a violent reaction. Suddenly, Linda wakes, recognizes him, and dies. ...read more.

This demonstrates that even at the level of casual conversation and habit, religion has been replaced by reverence for technology-specifically the efficient, mechanized factory production of goods that Henry Ford pioneered. Alienation The motif of alienation provides a counterpoint to the motif of total conformity that pervades the World State. Bernard Marx, Helmholtz Watson, and John are alienated from the World State, each for his own reasons. Bernard is alienated because he is a misfit, too small and powerless for the position he has been conditioned to enjoy. Helmholtz is alienated for the opposite reason: he is too intelligent even to play the role of an Alpha Plus. John is alienated on multiple levels and at multiple sites: not only does the Indian community reject him, but he is both unwilling and unable to become part of the World State. The motif of alienation is one of the driving forces of the narrative: it provides the main characters with their primary motivations. ...read more.